Louzanne Coetzee rounds off Paralympics in style with marathon bronze for Team SA. 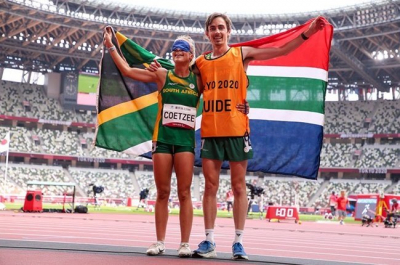 Louzanne Coetzee applied the finishing touches to Team SA’s campaign at the Tokyo 2020 Paralympics when she surged to the bronze medal in the women’s marathon (T12) on a cool and overcast morning in the Japanese capital.

The 28-year-old had earlier in the Games won the silver medal in the women’s 1500m (T11) and she added to her collection with a sensational second half of the T12 marathon on the Tokyo streets on Sunday.

The bronze medal that Coetzee won, having finished in a world record time for her T11 classification in 3hr 11min 13sec, closed Team SA’s tally at seven for the Games, comprising four golds, one silver and two bronze medals, as well as three world records. Coetzee shaved 1min 42sec off the previous T11 world marathon record.

As if it might be a future trivia question, the final medal of the entire Tokyo 2020 Paralympics programme was won by a South African – Coetzee.

She had come from fifth position at halfway to power past Edneusa de Jesus Santos of Brazil and Portugal’s Maria Fiuza at the 30km mark and she then proceeded to put distance between herself and the fourth-placed Brazilian on the run in to the Tokyo Stadium.

The race itself was won by Japan’s Misato Michishita in 3:00,50, followed by Russia’s Elena Pautova in 3:04.16. There was then a seven-minute gap to Coetzee who came into the stadium with her guide Claus Kempen, who had been a constant source of encouragement over the 42.2km route.

"At the 30km mark we moved up into third and it was wonderful how strong Louzanne was. With 12km to go the race really began and with 8km to go I was telling Louzanne that we mustn’t kick for home too early," Kempen said.

Coetzee herself felt that because it was a mixed class marathon (T11s and T12s for the visually impaired) and that she’d finished third was "special".

"We were in fifth place for a long way and it was never in my head to move into third. But, I’ve been blessed. A world record in my class, a PB and a medal. I can’t ask for more. I’ve run a couple of bad marathons in the past but this was perfect."