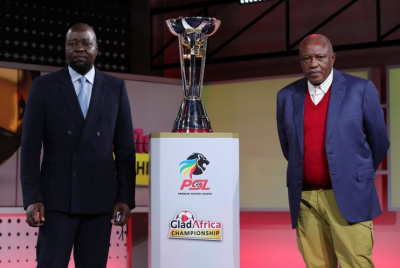 The 2020-21 GladAfrica Championship season threatens to end under a cloud of uncertainty amid confusion as to which team actually goes into the final round of fixtures on Sunday, 23 May, as league leaders.

All eight games will kick-off simultaneously at 3pm CAT.

As things currently stand, Royal AM are in pole position to win the GladAfrica Championship and automatic promotion to South Africa's elite league, with a point at home to Cape Town All Stars enough to punch their DStv Premiership ticket.

The KwaZulu-Natal club claimed a dramatic 2-1 win at Tuks Stadium last weekend to move three points clear atop the league standings and onto the cusp of top-flight football. Victory sparked mass celebrations among the Royal AM faithful, led by owners Shauwn Mkhize and son Andile Mpisane.

That seemed to change earlier this week when second-placed Sekhukhune United were awarded three points following a disciplinary hearing on Wednesday, after it was discovered that Polokwane City failed to oblige to the National Soccer League (NSL) rules by not using five players aged under-23. Rise and Shine initially won said fixture 1-0 in the Limpopo province earlier this year.

As a result of the arbitration ruling, Babina Noko climbed to the top of the league standings and ahead of Royal AM on goal difference but as of Friday this had not been confirmed by the Premier Soccer League (PSL), who indicated that they will contest the decision after another special Exco meeting.

Despite fears that the final round of fixtures would have to be pushed back as a result and confusion as to if a league winner will actually be announced on Sunday, the PSL revealed that the matches will go ahead as planned.

This eventual outcome could not only have an impact on who wins automatic promotion, but on the play-offs as well. Only three points currently separate Sekhukhune (47) in second and JDR Stars, who they face at Giant Stadium, in sixth spot (44).

Alongside Royal AM and Sekhukhune - TS Sporting, Richards Bay FC, Free State Stars and JDR could all still finish in second or third respectively.

Richards Bay have only one win in their last five matches and have terminated the contract of coach Simo Dladla as a consequence. The former GladAfrica Championship leaders have fallen down to fourth and will need a positive result on the final day - and hope other results go their way - if they are to seal a play-off berth.

At the other end of the league standings, Bizana Pondo Chiefs' fate has already been sealed and they will be playing ABC Motsepe League football again next season. One of either Steenberg United or Cape Town Spurs will join them with the latter currently in 15th spot, level on 30 points with their Cape rivals but behind on goal difference.

Twitter
More in this category: « Tyson Fury vs. Deontay Wilder trilogy fight to be on July 24 in Las Vegas. Premier League - Who will make Champions League? Who's in the Europa League mix? »
back to top