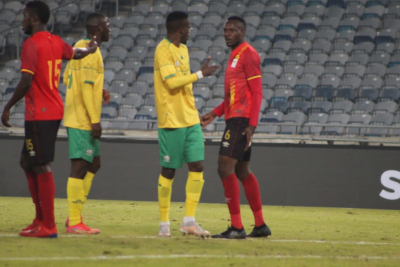 South Africa secured a 3-2 win over Uganda in an international friendly match on Thursday night.

The sides cancelled each other out in the early exchanges but the Cranes broke the deadlock in the 17th minute from a counter-attack that ended with Ibrahim Orit heading home Emmanuel Okwi's cross at the back post.

The hosts, meanwhile, regrouped defensively after that but they did not have the combinations to open up the Uganda rear-guard and failed to register a single shot at goal in the opening 45 minutes.

The changes paid off as Makgopa levelled matters in the 62nd minute after pouncing on a cross by fellow substitute Kutumela for a goal on debut.

Bongokuhle Hlongwane completed the turnaround for Bafana five minutes later with a left-footed strike that took a slight deflection for his first national team goal.

Makgopa then capped off his memorable debut with another goal seven minutes before time with a cracking low strike after a through ball by Mkhulise.

Abdu Lumala pulled a goal back in the last minute of regulation time with a close-range header after Bafana failed to clear their lines, but it was too little too late as South Africa clinched a 3-2 win.

More in this category: « Manchester United bid for Sancho rejected while Wijnaldum joins PSG. Lead your team to victory with these Carling Cup game-changers. »
back to top