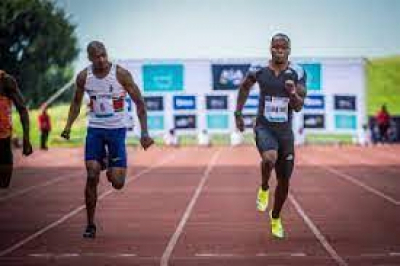 While a 100-metre race lasts just 10 seconds, it took Akani Simbine most of that time to get going, but he did enough to clinch victory in the Diamond League meeting in Florence on Thursday night.

The South African champion has spent the last few weeks training in Gemona, Italy, having last run at the national championships in Pretoria in mid-April.

His coach, Werner Prinsloo, told IOL Sport earlier this week that he wasn’t expecting a seriously quick time from his athlete, and he was proven right as Simbine won in 10.08 seconds on a perfect night in Florence.

That made it two wins in two years, after he clocked 9.96.

Thursday’s time was well short of his season’s best of 9.99, but the 27-year-old will be delighted to have taken top spot against a solid field that included American veteran Mike Rodgers and Ivorian Arthur Cissé.

It was Antigua’s Cejhae Greene and Briton Chijindu Ujah who were the fastest out of the blocks, with Simbine taking a while to get going. Ujah exploded ahead at the 50m mark, but the South African stayed in touch and eventually caught up and just claimed the win on the finish line in 10.08.

For Simbine, though, it’s all about peaking at the Tokyo Olympics, and this is the first step on his journey to Japan.

The 32-year-old went out fast, and was in the top two after 200m. But that was when Dutch star Femke Bol turned up the heat, and she ran the race of her life to set a new national record of 53.44.

The third South African in action on the night was 400m national champion Zakithi Nene. He would’ve had high hopes going into the race, having run 45.03 this year.

But after flying out of the blocks from lane eight, the 23-year-old’s strategy caught up with him, and he was caught by Colombian Anthony Zambrano, who powered to victory in 44.76.

"Congratulations to Akani for winning his first Diamond League of the season!” said James Moloi, the President of Athletics South Africa. “He has been working very hard with his coach and support staff.

"What he has accomplished can only be through dedication and utmost discipline. His time may not reflect what he is capable of, but his confidence will be highly boosted by the win against a credible line-up of the day."

We urge all our athletes to make use of every opportunity they may get to compete as competitions are not easy to access especially outside the country during this time of the global pandemic. So, use the competitions currently at our provinces to qualify and to prepare for the Olympics."

The fourth leg of the World Athletics Diamond League series will be held in Oslo, Norway on 1 July 2021.