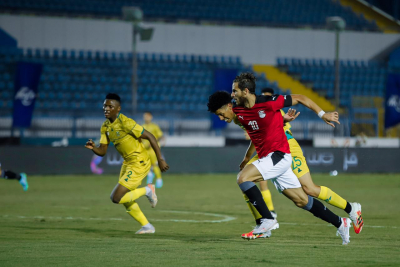 Mostafa Mahommed scored a double as Egypt U-23 national team defeated South Africa in their preparations for the 2020 Tokyo Olympics.

Egypt is finalising preparation for the Tokyo Olympics after Shawky Gharib’s men qualified for the tournament following their U-23 AFCON triumph in 2019.

The Pharaohs were placed in Group C, aka Group of Death, alongside European champions Spain, Argentina, and Australia.

SA Coach David Notoane lined up in a 4-3-2-1 formation, with Orlando Pirates pair of Bongani Sam and Thabiso Monyane playing as wing-backs while Luther Singh, Rowan Human and Keletso Makgalwa were deployed behind lone-striker Lyle Foster.

South Africa have been drawn in Group A against hosts Japan, France and Mexico in the 2020 Tokyo Olympic Games next month.

The Pharaohs are currently holding a closed training camp as they are set to face South Africa in two friendlies, the first of which took place on Thursday.

The visitors started the game strongly and had two dangerous chances in the opening 15 minutes, but it was the Pharaohs who broke the deadlock.

In the 18th minute, Ahmed Fetouh received a ball from Ibrahim Adel, before launching an inch-perfect cross on Mostafa Mohamed’s head, and the Galatasaray striker found the back of the net, despite appearing to be offside.

Ahmed Fetouh nearly doubled the scoring just minutes before the half-time whistle, but the post denied his stunner.

And in the 53rd minute, Mostafa Mohamed added his second of the game after another impressive pass from Ahmed Fetouh, which put him through on goal.

The second-half was quiet and saw some chances here and there, but eventually, both teams settled for the result ahead of their second friendly next Sunday.