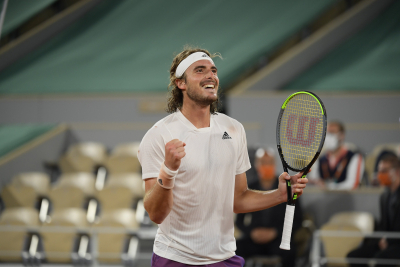 Stefanos Tsitsipas became the first Greek player to reach a Grand Slam final after holding off Alexander Zverev's fightback from two sets down in a tense French Open semi-final.

Tsitsipas rediscovered his level in the decider, halting Zverev but missing four match points before serving out.

Serbian top seed Djokovic and long-time Spanish rival Nadal, who is the defending champion and looking for a 14th French Open title, meet later on Friday.

After sealing victory with an ace on his fifth match point, Tsitsipas triumphantly raised both arms in the air before sharing a warm embrace with his opponent at the net.

The Greek then sat back on his chair to contemplate what he had just achieved before being overcome by emotion at the start of his on-court interview.

After taking a few moments to compose himself, Tsitsipas said: "All I can think of is my roots, where I came from, I came from a small place outside Athens.

"My dream was to play here, to play on the big stage of the French Open one day. I never thought I would do it."

Tsitsipas and Zverev have long been two of the upcoming stars in the men's game and when the 'Big Three' of Djokovic, Nadal and Roger Federer eventually retire, this promises to develop into one of the key rivalries for the sport's major honours.

Both young men have already won the season-ending ATP Finals and Masters titles in their burgeoning careers, but are yet to land one of the sport's four biggest prizes.

Tsitsipas is now one more win from achieving that goal after preventing Zverev recording another memorable victory from a two-set deficit.

The Greek has been the leading player on the ATP Tour this year, winning more clay-court matches than any other player and claiming titles on the surface in Monte Carlo and Lyon.

Playing smartly and confidently, but without being truly tested by Zverev, Tsitsipas eased into a two-set lead.

Tsitsipas was dominant from the baseline as a lost-looking Zverev failed to change his tactics and was drawn into errors which he could not rectify until the third set.

Suddenly the German sixth seed improved his level and tightened up his game to haul himself level.

The first game of the final-set decider proved pivotal in the eventual outcome of the match.

Tsitsipas fought off three break points to hold serve, halting Zverev's momentum and going on to earn what was the decisive break in the fourth game.

"The opening game was nerve-wracking and so intense - it was the most important game in the fifth set," said Tsitsipas.

"I came back, stayed alive and had the crowd with me. They gave me energy.

"I still felt there was hope and opportunities to fight back. That's what I did."

More in this category: « Zwane's talks for the new deal at Sundowns at an advanced stage. Djokovic beats Nadal & faces Stefanos Tsitsipas in French Open final. »
back to top