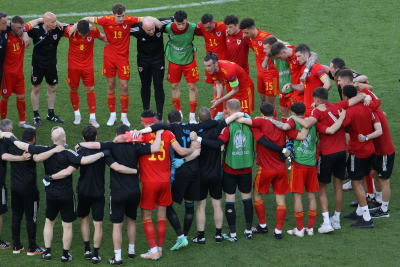 Manager Rob Page praised the character of his players after Wales salvaged a 1-1 draw with Switzerland in their European Championship opener in Baku on Saturday, leaving Group A wide open after the first round of matches.

In only his third start in nine matches under interim manager Page, the Cardiff City striker was close to giving Wales an early lead when his header was superbly tipped over by Yann Sommer.

Switzerland took control of the match from that point and, after squandering several chances, they eventually scored as the impressive Breel Embolo headed in from Xherdan Shaqiri's corner.

Wales were slow to improve from their sluggish start but, with 15 minutes left, Joe Morrell's delicately clipped cross found Moore, whose flicked header into the bottom corner sent the small but loud pocket of Wales fans in Baku wild.

Those supporters then thought their hearts had been broken 10 minutes later as Swiss substitute Mario Gravanovic scored moments after coming on - but a VAR check disallowed his goal for offside.

Switzerland kept pressing for a winner deep into added time but were denied by a series of brilliant saves from Danny Ward.

Such was the intensity of the late Swiss pressure, a draw will have felt like a great relief for Wales, whose next game is against Turkey in Baku on Wednesday.

"To go a goal behind to a team like Switzerland and show the endeavour to get back into it is a credit to the players. Overall it is a positive start," the manager told reporters.

"I thought we played OK. They are a great group of lads and the grit they showed in this game is no surprise to me."

Page also praised the hard work of goalscorer Moore, and said he was much more than just an obvious threat in the air.

"I've been impressed with Keiffer throughout his time in international football. He is not just a presence up top, his link-up play is good and he has a good touch."

After Turkey were crushed 3-0 by Italy in Friday's tournament opener, Wales' second match in Baku could have a significant bearing on their hopes of reaching the knockout stages.

Wales had waited 58 years for their moment in the sun at Euro 2016. Absent from major finals since the 1958 World Cup, they marked their return with a mesmerising run to the semi-finals.