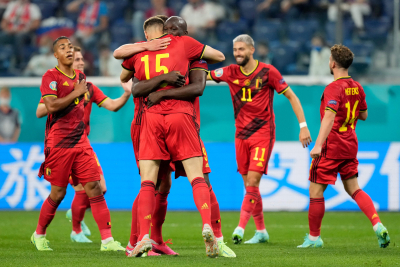 Romelu Lukaku paid tribute to his Inter Milan team-mate Christian Eriksen after scoring against Russia to help world number one side Belgium start Euro 2020 with a win.

Denmark midfielder Eriksen collapsed on the pitch earlier on Saturday in the Group B game with Finland and received emergency treatment on the field.

Lukaku opened the scoring after pouncing on a mistake by Andrey Semenov and celebrated his goal by shouting "Chris, Chris, I love you" in front of a television camera.

Roberto Martinez's side added to their lead before half-time after substitute Thomas Meunier - an early replacement for injured Leicester defender Timothy Castagne - slotted home when Anton Shunin failed to hold a cross.

In-form Lukaku added a late third with a composed finish to seal a comfortable win.

The victory put Belgium,one of the fancied teams at Euro 2020, top of the group, level on points with Finland, who beat Denmark in a game which was suspended following Eriksen's collapse before being re-started.

Meanwhile Finland won their first game at a major finals as they beat Denmark in a Euro 2020 match that was overshadowed by Danish midfielder Christian Eriksen collapsing on the pitch.

Eriksen, 29, collapsed after 41 minutes and received CPR on the pitch as his visibly-distressed team-mates surrounded him and fans around the world watched in shock.

After approximately 15 minutes of treatment, the Inter Milan star was carried off on a stretcher. Supporters from both countries chanted his name while both sets of teams spent the next hour in their dressing rooms.

Only when informed that he was awake in hospital did the players agree to resume the match.

At 19:05 BST, two hours five minutes after kick-off, Denmark goalkeeper Kasper Schmeichel returned to the pitch, before the Finland players applauded all the Danish squad members and the spectators in Copenhagen gave all the players a standing ovation.

The match resumed at 19:30 BST with the final four minutes of the first half played before a five-minute break for half time and then the second half.

Before Eriksen's worrying collapse, Denmark had been the better team, with Finland goalkeeper Lukas Hradecky saving Jonas Wind's 20-yard effort and tipping a header from Tottenham midfielder Pierre-Emile Hojbjerg over the bar.

The match, the third of the delayed Euro 2020, had begun in a raucous, passionate atmosphere with more than 15,000 people at the Parken Stadium in the Danish capital. But, unsurprisingly, it was far more subdued on the restart as attention focused on Eriksen's health.

The visitors, who have never qualified for a World Cup and were playing in their first European Championship finals game, took the lead when Schmeichel was unable to keep out Joel Pohjanpalo's header following Jere Uronen's cross.

Denmark had a chance to equalise when they were given a penalty after Paulus Arajuuri was judged to have fouled Yussef Poulsen, but Hojbjerg's poor spot-kick was saved by Hradecky.