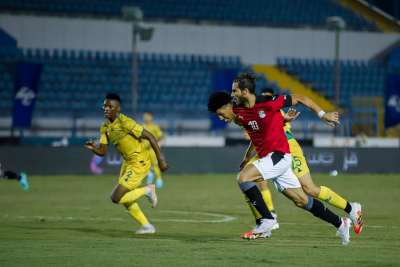 South Africa’s U-23 side suffered another loss to Egypt U-23 after going down 3-0 in a friendly clash on Sunday evening.

A change in the goalkeeping department saw Sifiso Mlungwana come in for Mondli Mpoto, with Liam Jordan, McBeth Mahlangu and Lyle Foster also handed a start.

The game rounded off Egypt’s preparations for the Tokyo Olympics, where they were placed in an extremely difficult group C, alongside European champions Spain, South American champions Argentina, and Australia.

Egypt’s preparations included two clashes with South Africa, with both ending in victories for the young Pharaohs. The first game took place on Thursday as Mostafa Mohamed’s double clinched a 2-0 win for Shawky Gharib’s men.

Three days later, both teams faced off again and this time, the Egyptians were more prepared and increased their win-margin to three goals.

The first-half of the game witnessed the three goals of the match, with the scoring starting after just 16 minutes when Ahmed Yasser Rayan took advantage of the South African goalkeeper howler to break the deadlock.

Two minutes later, the Al Ahly loanee doubled the lead after another gift from the South African defense, before Salah Mohsen killed off the tie with a third goal in the 21st minute.

But it wasn’t all good news for the Egyptians in the first-half as MOTM Ahmed Yasser Rayan had to be brought off due to an injury.

Chances kept coming in the second half of the game for the Egyptians, but without success in reaching the South African nets as the game finished 3-0.

The next game for Egypt will be in the Olympics on the 22nd of July against European champions Spain, who qualified after winning the UEFA U-21 Championship.