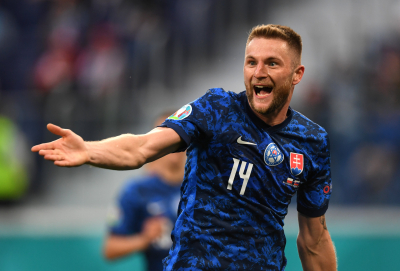 Milan Skriniar's fine low shot on the turn from the edge of the penalty area secured the three points for Slovakia, a country ranked 36th in the world.

They had taken an early lead when the ball bounced off the post and rebounded in off Poland goalkeeper Wojciech Szczesny after a fine run and shot from Robert Mak.

A lovely one-touch move, calmly finished by Karol Linetty, brought the Poles level early in the second half.

The Poles were left with 10 men after Krychowiak received his marching orders for a clumsy challenge on an opponent and Skriniar, who man-marked Lewandowski out of the game, struck with some aplomb at the other end.

The Poles failed to clear a corner and Skriniar, who won the Serie A league title with Inter Milan this season, gave Szczesny no chance with his fierce low shot from 14 metres.

Lewandowski glanced a close-range header wide in the 87th minute as Poland pressed in the closing stages and Jan Bednarek missed their final chance in stoppage time when he fired wide from inside the penalty area.

The other two nations in Group E, Spain and Sweden, face each other in Seville in the late game on Monday (20:00 BST).

More in this category: « SA U-23 side suffered another loss to Egypt in a friendly clash. Tennis South Africa and the SABC announce a new three-year partnership. »
back to top