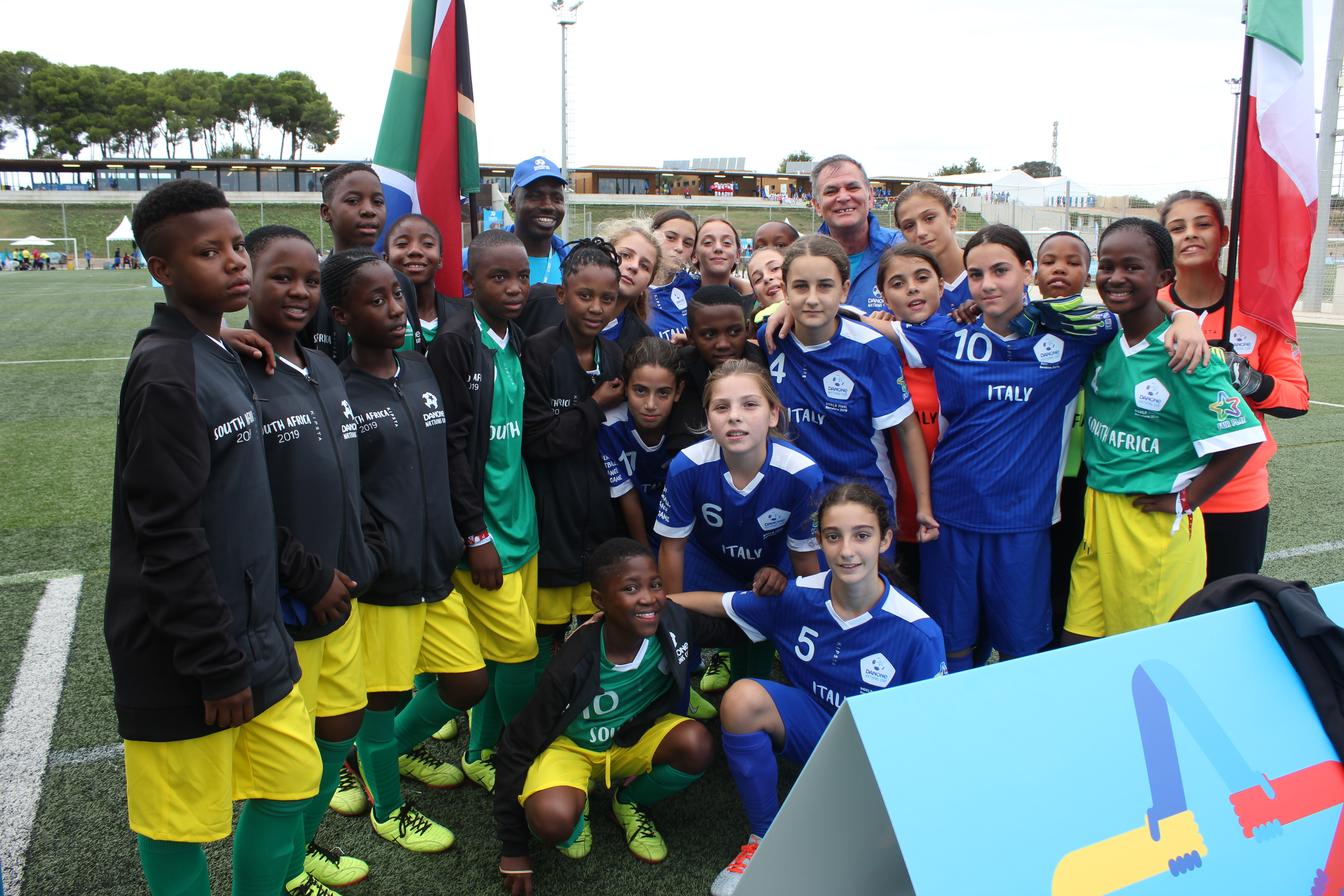 Reflection back on the 2019 Danone Nations Cup world finals that took place in Barcelona, Rebonwe Primary School soccer players and coach admit it was an experience that has changed their lives and valuable lesson have been learnt in terms of soccer and life skills

It was a busy week in Barcelona for the three under-12 school teams that represented South Africa at the under-12 Danone Nations Cup World Finals last month.

The boy’s teams, Nomlinganiselo (Western Cape) and Muzuvukile (KwaZulu-Natal), ended up 20th position in the 2018 and 2019 tournaments, while the girl’s team, Rebonwe (Gauteng) won their playoff game against England and finished 7th place in the 2019 girl’s tournament.

It was not an easy ride for the South African teams and that could well be because of the way in which they were selected. According to the rules of the competition the participating countries can decide the basis on which they identify their teams. In South Africa’s case, the South African Schools Football Association (SASFA) has run the tournament since 2007. They stage a national tournament in which school teams, mainly from the townships and rural areas compete for the right to represent the country.

The South African team is therefore a development team, whereas most of the countries that also participated sent a youth academy of one of their top clubs. The Spanish 2019 teams, for example, were Villarreal FC (boys) and Espanyol FC (girls).  Espanyol, who played their final match on home soil, emerged as the ultimate girl’s champion.

For the Rebonwe girls the trip was a life changing experience, and nothing was going to stop them from using this opportunity to learn as much as possible about soccer, the importance of developing healthy lifestyles, meeting and making friends from around the world and traveling to different countries.

The girls were grouped together France, Italy and Japan, all youth academies, in the qualification stage with games played at Salou.  Their final match to determine positions was played at the RCDE Espanyol Stadium in the heart of Barcelona. (South Africa beat England on penalties in their final game).

“We will never be the same,” said an excited coach, Emmanuel Gogela. “Our first match was against Japan who played a strategic game.  Their passing, use of space and positioning on the field were excellent.  We lost the game 6 – 0 and realised immediately that it was not going to be easy and we need to rather focus on learning as opposed to winning.”

Gogela was also impressed with the approach to the game of the other teams.  Their passion, teamwork, the way their opponents communicated on the field as well as the communication between the coach and the players.  “The coaches with each of the teams were highly qualified and experienced and I went to chat to them after each game to help me understand international coaching techniques and that was highly informative for me.”

The Italians puzzled Gogela. “They beat us, yet all the girls came off the field upset which I could not understand so I asked the coach.  He told me that his team has been competing at the top level in their particular age group since they were very young.  They were top players yet their performance against us was poor and he said they did not follow instructions.  He told me that, unlike our school team, these girls played soccer every day and sometimes a couple of times a day and it is not about winning, but about their style of play and their tactics and techniques.   He was very complimentary about our girls saying that if he had brought a school team, we would have beaten them.  Our girls, particularly two of my team members, unsettled his team.  He predicted that we would face England in the final match, and we would beat them and when this happened, he came to find me and said to me ‘I told you so’.”

France was their toughest opponents in the group phase, admitted Gogela.  “I was particularly in awe of their determination, combinations, the way they marked and their ability in finding spaces were so good.”

The height of their opponents was also a surprise to the Rebonwe girls.  “We were warned that the teams would be taller than us, but we were not quite prepared for their actual size and the girls were a little unsettled by this. What I told them is to keep to our game plan and not to focus on height as we are quick and nimble.  My captain and defender caught the attention of some of the coaches in Barcelona.  I had some coming to me to tell me that they must be nurtured as they could be international stars one day.  They have the skills that just need to be refined.” 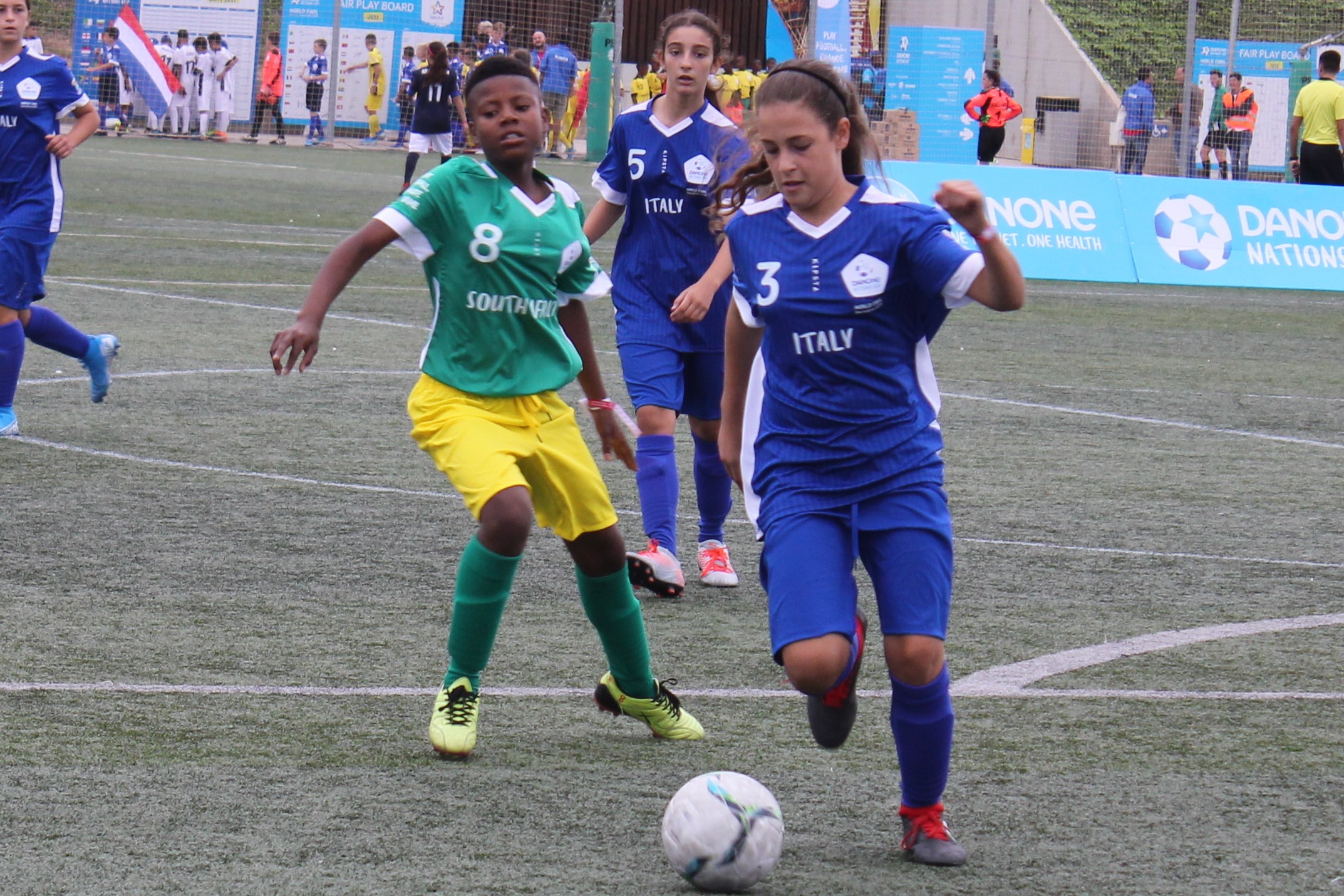 The girls received a hero’s welcome when they touched down at OR Tambo Airport.  “Parents, teachers and friends came to greet us which was so encouraging. Our local councillor visited the school and brought with him a development coach who has agreed to coach the girls every Thursday to ensure that they keep learning and improving.”

Accompanying the teams was ex Banyana Banyana player, Amanda Dlamini, who was impressed with the technical and tactical skills displayed by the teams.

Having Amanda there helped a lot, admitted Gogela.  “Amanda was invaluable.  She spoke to the team collectively and individually as required.  She was a pillar of strength and support for us.  Winning and losing go hand in hand and when the girls suffered a loss, particularly the first loss against Japan, she was there to pick the players up and taught them to put the game aside and focus on the next game.”

Gogela commented on the overall experience.  “I wish to thank Danone, and everyone involved with this incredible tournament, and encourage all schools around South Africa to get involved as there is no tournament like it. This is true football development.  South Africa has a lot to learn in terms of youth football.  The game is changing and to qualify for top competitions at the national level we need to start as young as possible and learn from our international counterparts.”

The coaches of the boys teams also admitted that the experience was unparalleled and the world finals must be seen as a learning curve.  The 2018 team, Nomlinganiselo, drew their first match against Portugal 0-0 before losing their other preliminary games. They drew with Andorra in the playoffs, but lost on penalties, which was repeated against England to finish in 20th position.

Tweet
More in this category: « Springboks on top of the world. LALIGA the most competitive of Europe's top League. »
back to top