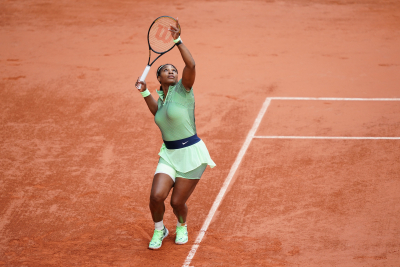 Former Wimbledon champions Andy Murray and Venus Williams have been given wildcards to play at this year's Championships at the All England Club.

Katie Boulter is one of five British women joining Williams in the draw.

Alcaraz, 18, is the youngest player ranked inside the men's world top 200 and earlier this month became the youngest man to reach the third round of the French Open in 29 years.

On Tuesday, former men's world number one Murray made an emotional and winning return in his first singles match on grass for three years as he reached the second round at Queen's.

Japan's world number two Naomi Osaka is still on the Wimbledon entry list after pulling out of the recent French Open and revealing she had suffered from depression.

The 23-year-old said she would "take some time away" from the sport and pulled out of this week's event in Berlin.

"At this point in time she's entered into the Championships and we haven't received confirmation that she won't compete," said Wimbledon chief executive Sally Bolton.

Both Wimbledon singles finals will be played in front of capacity crowds - the first UK outdoor sporting events to do so since the start of the coronavirus pandemic.

With the event part of a government trial for the suspension of masks and social distancing, face coverings will not have to be worn when spectators are in their seats.

The tournament starts on 28 June and there will initially be 50% capacity allowed in the grounds.

That will then rise throughout the tournament before the two finals, which take place on the 15,000-capacity Centre Court on 10 and 11 July.

Tickets will go on sale on the Wimbledon website at 13:00 BST on Thursday, 17 June, with those wanting to apply having to register an account by 00:00 BST earlier on Thursday.

All ticket-holders will be required to show proof of Covid status on entry, either in the form of both vaccinations or a negative lateral flow test.

More in this category: « Eyes of the South, and the North, on the Vodacom Bulls - Rainbow Cup. Chiefs,Al Ahly release their squads for Wydad & Esperance clash respectively. »
back to top