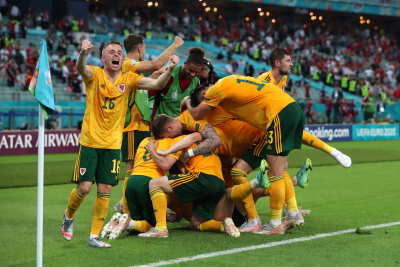 Wales collected a vital three points at Euro 2020 with a 2-0 victory over Turkey in the teams' second Group A match on Wednesday.

With a crowd of more than 30,000 in Azerbaijan's capital city effectively making this a home game for Turkey, Wales responded to the hostile atmosphere with a vibrant, attacking display in which they cut their opponents open at will.

After a host of missed chances in a breathless first half, Gareth Bale played a brilliant lofted pass through the heart of the Turkish defence for Aaron Ramsey, who brought the ball down and finished elegantly.

Although Turkey came back strongly, Bale squandered a golden opportunity to increase the lead around the hour mark. After winning a penalty with a tricky dribble on the edge of the box, the Wales No. 11 skied his shot from the spot well over the bar.

There were some nervous moments for the Welsh defence as they withstood Turkish attacks - with Danny Ward making a vital late save to deny Merih Demiral.

But Connor Roberts struck from a corner deep in injury time to seal a win that takes Wales to four points with one match left in the group stage.

That final fixture will be in Rome on Sunday against Group A favourites Italy, who face Switzerland later on Wednesday.

More in this category: « Confirmed: Golden Arrows part ways with coach Mandla Ncikazi. Sergio Ramos leaves Real Madrid after 16 years at the club. »
back to top