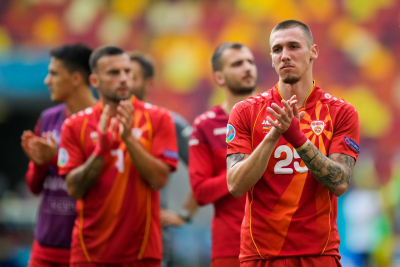 Ukraine got their first win at Euro 2020 as they beat North Macedonia 2-1 in Bucharest on Thursday.

Andriy Yarmolenko and Roman Yaremchuk scored for Ukraine in the first half as they became the first duo to score in each of their team's first two matches in European Championship history, having both found the net in their 3-2 defeat to the Netherlands.

Leeds United's Ezgjan Alioski pulled a goal back in the second half as he scored the rebound after his initial penalty was saved by Ukraine goalkeeper Georgiy Bushcan following a foul on Goran Pandev.

Both sides came into this match having lost their opening games -- North Macedonia went down 3-1 to Austrai-- but, despite facing a fast start from their opponents, Ukraine's greater quality soon showed as they created the majority of the chances.

The opening goal came on 29 minutes as Yarmolenko finished off from close range following a corner from the impressive Ruslan Malinovskyi.

Pandev produced a lovely dinked finish over Bushchan on 39 minutes, but the goal was ruled out for a clear offside.

North Macedonia started the second half with more purpose and were rewarded for their endeavour on 56 minutes when Argentine referee Fernando Rapallini pointed to the spot following a foul by Oleksandr Karavayev on Pandev. Alioski saw his effort saved, but was first to the rebound to power home.

Malinovskyi missed the chance to wrap up the win for Ukraine when he saw his 83rd-minute penalty awarded for handball saved. It was the fourth spot kick missed of five awarded throughout the tournament so far.

If Netherlands avoid defeat in the other Group C match with Austria later on Thursday, major tournament debutants North Macedonia will become the first team eliminated from Euro 2020. They face Frank de Boer's side in their final group game on Monday. Ukraine's next task is a clash with Austria on the same day.

Meanwhile players and fans from Denmark and Belgium showed support for Christian Eriksen during an emotional minute's applause after halting their European Championship group game.

Referee Bjorn Kuipers stopped play in the 10th minute after Yussuf Poulsen had given Denmark an early lead.

Eriksen is recovering in hospital after he suffered cardiac arrest in the same stadium during Denmark's opening loss to Finland in Copenhagen on Saturday.

Elsewhere teams at Euro 2020 could face fines if their players move drinks provided by sponsors at news conferences, as Cristiano Ronaldo and Paul Pogba have done in recent days.

"Uefa has reminded participating teams that partnerships are integral to the delivery of the tournament and to ensuring the development of football across Europe, including for youth and women," tournament organisers said on Thursday.

Uefa's Euro 2020 tournament director Martin Kallen said players were contractually obliged "through their federation of the tournament regulations to follow".

However, he said he understood the actions of players who, like Pogba, did such things for religious reasons.

Team have been reminded of their contractual regulations and Kallen said disciplinary action was "a possibility".

Uefa does not intend to directly fine players and any sanctions are at the discretion of the national federations.

"We are never fining players directly from the Uefa side, we will do this always through the participating national association and then they could look if they will go further to the player, but we are not going directly for the moment to the player," Kallen said.

"We have the regulations signed by the participating federations."

More in this category: « Rafael Nadal pulls out of Wimbledon and Tokyo 2020 Olympics Games. Legal issues forces PSL to postpone promotion/relegation play-offs. »
back to top