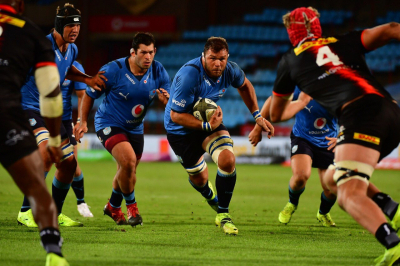 Treviso, Italy (18 June 2021) – A packet of biltong could well give the Vodacom Bulls the edge against their Rainbow Cup final opponents Benetton on Saturday, with Bulls utility back Gio Aplon joking that he’s come to Treviso with a plan of his own.

Aplon joked that he has brought over a little package from South Africa from the family of Benetton’s South African scrumhalf Dewaldt Duvenage, and plans to trade it for a few Benetton team secrets.

"I’ve brought a small package for Dewaldt from his family, which I’ll give to him. But with that I’ll tell him he needs to share a few secrets with me. It’s a bit of biltong and sweets and I know he’ll want to get his hands on that, but before then he’ll have to give me a few secrets."

In all seriousness though, Aplon is full of praise for the role Duvenage has played in this Benetton team. And Aplon says he’s looking forward to making his own impact for the Vodacom Bulls on Saturday as he continues his comeback from injury.

"It depends on the team selection. But personally, it would be great for me to be able to play and to give back to the team that supported me through some difficult times over the past seven months. Hopefully I can put in a good performance as a thank you for that.

"For me it’s another opportunity to play in a final. I’ve played in a few before. You take that experience and you want to replicate that feeling going into this final, and also to help keep the guys around you calm. I will also be a bit nervous. It doesn’t matter where you play – a final stays a final. This is our first final as a group away from Loftus Versfeld, so obviously there are a bit of nerves.

"But the most important thing for me is to have an influence on Saturday’s match and to help us win. All the focus and energy is now on Saturday’s final."

More in this category: « Netherlands beat Austria to book last 16 spot at EURO 2020. Milwaukee Bucks force series decider after 104-89 victory over Brooklyn Nets. »
back to top