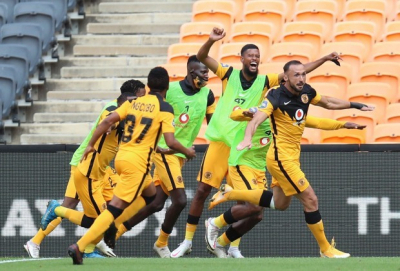 Kaizer Chiefs will become the third South African club to feature in the semifinals of Africa’s elite club competition the Champions League when they take on Wydad Casablanca in Morocco on Saturday.

They join Mamelodi Sundowns and Orlando Pirates, who have each reached this stage three times before, and more often than not it is the South African clubs who have prevailed.

Chiefs forward Lazarous Kambole says his side have to believe they can win the Champions League and know that if they can pull it off, it will be potentially the greatest achievement of their careers.

The Soweto Giants are set to face Moroccan giants Wydad Casablanca in the away leg of their semifinal on Saturday, and with Esperance and Al Ahly contesting the other Last 4 tie, face an incredibly tough path to lift the trophy.

But Zambia international Kambole says they must believe it is possible and take that mindset into their semifinal clash.

"Winning the African Champions League will be a great achievement for me,” he told his club’s website. “This is the league of Champions – if you want to be counted among the best, you must beat the champions.

"Chiefs is a big club and even in the CAF Champions League we are expected to win the trophy. That is pressure on its own we just have to go all out and win the competition.

"It’s going to be nice to go beyond the semifinals. This has been my breach, I lost in the semifinals in 2016 [with Zesco United v Mamelodi Sundowns]. So, here is another opportunity to go all the way to the final and win the competition."

Chiefs might be underdogs among the four remaining sides, but Kambole insists they have learnt a lot in this African campaign.

Stuart Baxter,meanwhile has not yet received his work permit to officially take up his role as head coach on his return to the club, and so the side will be led by assistant coaches Arthur Zwane and Dillon Sheppard.

The pair guided Chiefs to back-to-back DStv Premiership wins at the end of the campaign that saw them sneak into the top eight in the final table after they took over from axed Gavin Hunt.

Baxter will still travel with the team to oversee preparations behind the scenes, and will hope to be able to be pitchside for the return leg on June 26.

Virtually no one outside South Africa believes first-time semifinalists Chiefs have a chance of reaching the final at the expense of twice champions Wydad.

He believes that if Chiefs can shackle Wydad attackers Ayoub el Kaabi, Mohamed Ounajem and Tanzanian Simon Msuva, they can succeed where Sundowns regularly failed.

"Those three guys are tricky customers who repeatedly find space even in crowded areas. Chiefs must starve them of possession," said Kekana.

An added incentive for Wydad to win the two-leg tie is that the single-match final will be staged in Casablanca on July 17.

Meanwhile African club clashes do not come any bigger than this one with Ahly winning a record 21 CAF titles and Esperance seven, including the Champions League four times.

The last time they met was in the 2018 Champions League final with Esperance wiping out a two-goal first leg deficit to triumph 4-3 on aggregate.

Anice Badri scored to complete a dramatic return-match comeback and could face the Cairo Red Devils again as the Tunisian Blood and Gold seek to reach a third final in four years.

Badri hopes to score for the first time in Africa this season while five-goal Mohamed Ben Romdhane, who has attracted attention from Turkish clubs, is the most prolific Esperance marksman.

Ahly have been more impressive than Esperance en route to the penultimate stage, winning six of 10 matches and drawing three with Mohamed Sherif and Taher Mohamed netting three times each.