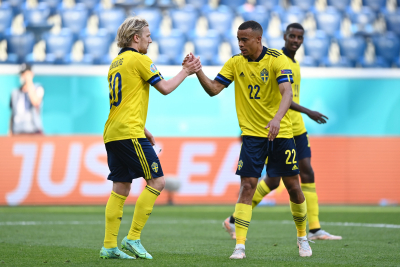 Emil Forsberg's second-half penalty ensured Sweden took a huge step towards qualifying for the last 16 at Euro 2020 with victory against Slovakia in St Petersburg.

RB Leipzig's Forsberg slotted in with 13 minutes remaining after substitute Robin Quaison was brought down by goalkeeper Martin Dubravka.

The spot-kick ended a run of 365 minutes without a goal for Sweden at the European Championship, since their opening group game at Euro 2016.

While Slovakia could have secured their progress to the knockout stages with a win, Sweden now lead Group E with four points - one more than Slovakia who face Spain in their final match.

In the first meeting between the sides at a major tournament, an uninspiring first half witnessed five attempts at goal, with Sweden captain Sebastian Larsson's deflected effort from outside the penalty area the only one on target.

Janne Andersson's side came to life after the interval, however, as Dubravka produced a superb save to keep out Ludwig Augustinsson's header before Marcus Danielson headed over from the resulting corner.

Sweden required just 25 minutes to record more passes than in the entirety of their one-sided opener against Spain, in which they held out for a point despite managing just 15% possession and one shot on target.

Having impressed in that match, 21-year-old Alexander Isak - La Liga's young player of the year after scoring 17 goals in 34 games last season - was initially starved of opportunities.

But he starred as Sweden asserted themselves in the second half, which saw Inter Milan defender Milan Skriniar produce an excellent sliding tackle to block Isak's strike shortly after the restart.

Real Sociedad striker Isak, who at 17 became his nation's youngest scorer with a goal against Slovakia in a 2017 friendly, forced Dubravka into action following a delightful driving run.

That was one of six dribbles he completed in the game - the most by a player at Euro 2020 so far - and fittingly it was Isak who played the ball into Quaison as he won the decisive spot-kick.

Defeat ended a six-match winning streak for Slovakia, who will be keeping close watch as Spain take on Poland in the other Group E match on Saturday (20:00 BST).

Meanwhile Christian Eriksen has been discharged from hospital after a "successful" operation to fit a heart-starting device.

The 29-year-old Denmark midfielder a suffered cardiac arrest during his side's defeat by Finland in Copenhagen on Saturday.

He visited the team on Friday and will now return home with his family.

"Thank you for the massive number of greetings," Eriksen said in a statement.

"It has been incredible to see and feel.

"The operation went well, and I am doing well under the circumstances.

"It was really great to see the guys again after the fantastic game they played last night. No need to say, that I will be cheering on them on Monday against Russia."

Former Tottenham player Eriksen, who is now at Inter Milan, collapsed shortly before half-time against Finland and needed to be resuscitated with a defibrillator.