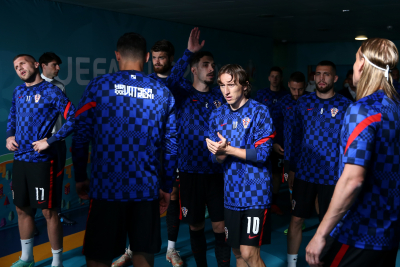 The Czech Republic took a huge step towards qualifying for the last 16 at Euro 2020 with an entertaining draw against Croatia at Hampden Park.

The Czechs opened the scoring through a controversial first-half Patrik Schick penalty, after referee Carlos del Cerro Grande checked the pitchside monitor and awarded the spot-kick for a Dejan Lovren foul on striker Schick.

Lovren, who missed Croatia's opening-game defeat by England with a knee ligament injury, caught Schick's nose with his elbow when the pair jumped to contest a corner.

Croatia looked for an immediate response, but Ante Rebic blasted an effort high and wide from 10 yards out.

But Zlatko Dalic's side sprung into life in the second half, with Ivan Perisic equalising minutes after the restart with a fine individual effort.

A quickly taken Andrej Kramaric free-kick released Perisic down the left wing, before he burst into the box, cut inside Vladimir Coufal and fired past Tomas Vaclik.

Playing each other for only the second time at a major tournament after a 2-2 draw in the group stages of Euro 2016, the game was an end-to-end encounter that lacked quality chances, with just three shots on target throughout.

It is the first time since the 2006 World Cup that Croatia have failed to win both of their opening two games of a major international tournament.

The Czech Republic have never beaten Croatia in four attempts, but the result leaves Jaroslav Silhavy's side top of Group D on four points, with Croatia third on one point. England and Scotland face each other at Wembley at 20:00 BST, where Gareth Southgate's side can secure a top-two finish with a win over their old rivals.