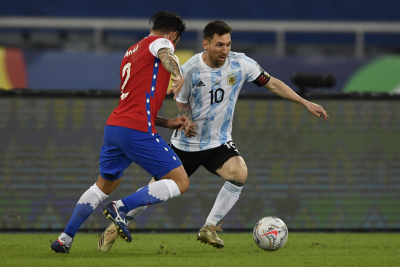 Argentina secured a victory over Uruguay at the Copa America thanks to a winner from Guido Rodriguez.

Uruguay hadn't beaten Argentina in the Copa America since 1989 and they went behind early on to Rodriguez's header.

Rodriguez, making his first start for his country since June 2019, headed in off a post early on following a cross from Lionel Messi.

Uruguay had a penalty appeal by striker Edinson Cavani turned down as they failed to register a shot on target in their opening match of the tournament.

Argentina's win moved them joint top of their group with Chile on four points.

"We tried to be more compact, to make it more difficult to score against. Up front we have monstrous players who can get goals at any moment of the match."

At the other end, Messi caused problems for Uruguay with his dribbles in the last third but he was frequently crowded out by Uruguayan defenders.

The result extended Argentina's unbeaten run to 15 games since they lost in the semifinal of the last Copa America in 2019.

Uruguay's next game is against Chile (21 June), while Argentina are next in action against Paraguay (22 June).

More in this category: « England play to a goalless draw with Scotland at Wembley. Richard Bland becomes oldest player to share lead after 36 holes at Torrey Pines. »
back to top