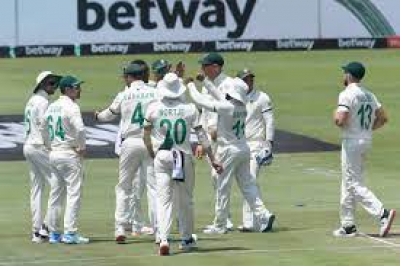 West Indies made the worst possible start to their innings when captain Kraigg Brathwaite was dismissed off the first ball as the home side limped to 56-4 at tea in reply to South Africa’s 298 on the second day of the second test at the Daren Sammy Cricket Stadium in Gros Islet, St Lucia, on Saturday.

Brathwaite gloved a legside delivery to ‘keeper Quinton de Kock which the South Africans almost reluctantly reviewed after it was given not out and were surprised and delighted in equal when the third umpire raised his electronic finger.

Fellow opener Kieran Powell (5) was trapped lbw by a nip-backer from Lungi Ngidi, another decision which had to be confirmed by third umpire Leslie Reifer after the batsman reviewed it.

The home side crashed to 30-3 when Roston Chase (4) was smartly caught at backward short leg by Kyle Verreynne off the bowling of Anrich Nortje.

Kyle Mayers (12) was the fourth victim in the afternoon when a straightforward edge off left arm spinner Keshav Maharaj was safely snapped up at slip by Aiden Markram.

Shai Hope (25*) and Jermaine Blackwood (2*) were unbeaten but far from comfortable on a pitch still offering lavish movement and good bounce for the fast bowlers.

The only bad news for the tourists was a mild stomach upset for Ngidi which saw him spend much of the session off the field and a hamstring twinge for De Kock which saw Verreynne take the ‘keeper’s gloves.

De Kock continued his glorious batting form in the morning session but fell just four runs short of a second consecutive century as he guided South African to 298 all out at lunch after he resumed on 59 with South Africa on 218-5.

South Africa may have failed to reach 300 but on a pitch still offering plenty of pace, bounce and seam movement for the fast bowlers, and a slow outfield, but the total always looked worth a lot more than the scoreboard suggested. The home side may well rue the ill-discipline which saw them concede 44 extras, comfortably South Africa’s third highest score behind De Kock’s 96 and captain Dean Elgar’s battling 77 on the first day.

After the entire first day was washed out, only 64.4 overs were possible on day two with India ending 146-3.

Put into bat in gloomy, bowler-friendly conditions, openers Rohit Sharma and Shubman Gill made a dazzling start, only to fall in quick succession for 32 and 28 respectively.

India were 88-3 when Cheteshwar Pujara was out lbw to Trent Boult but Kohli held firm against the Black Caps' all-seam attack with a watchful 44 not out from 124 balls.

Kohli, cheered on by a crowd reduced in numbers but heavily in his side's favour, continued through two stoppages for bad light but a third at 16:50 BST, and subsequent rain, prevented further play.

Vice-captain Ajinkya Rahane accompanied Kohli to the close with a more expansive 29 not out.

The frustrations of the weather interruptions are at least countered by the option of a sixth, reserve day for this showpiece final.

The winners will be crowned the first Test world champions but if no result is a possible the two teams will be named joint winners.