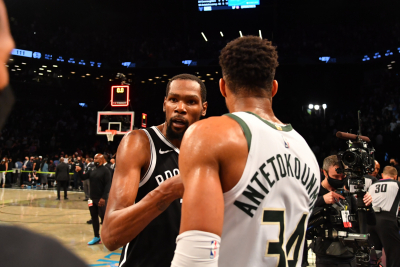 The Milwaukee Bucks have withstood Kevin Durant’s NBA-record 48 points in a Game 7, advancing to the Eastern Conference finals by beating the Brooklyn Nets 115-111 in overtime.

Giannis Antetokounmpo had 40 points and 13 rebounds, and Khris Middleton made the tie-breaking shot with 40 seconds left in the NBA’s first overtime Game 7 in 15 years in New York on Saturday night.

Kevin Durant scored 48 points for the Nets and made it 109 apiece with a second left to force overtime.

His toe was judged to be on the three-point line for the late effort as he earned two points instead of three before the Bucks went on to win.

They will now play the Atlanta Hawks or the Philadelphia 76ers in the final.

"I've never been in a game like this," said Khris Middleton of the Bucks. "We got lucky with his toe being on the line."

The Nets had led 101-96 with four minutes remaining of regulation time but had Durant to thank for taking the game into overtime.

Antetokounmpo then levelled the scores at 111-111 before Middleton put his side 113-111 up and, after Durant missed with an effort, Brook Lopez sealed the win for the Bucks.

"I want to be great," said Antetokounmpo. "We had to give everything. We knew we were going to be tired at the end of the game."

Durant finished on the losing side, despite his tally of 48 being the most points scored in a game seven in NBA history.

"We got looks, we just didn't knock them down," he said.

In a series where the teams often didn’t produce the quality of play that was anticipated between the league’s two highest-scoring teams, Game 7 was a thriller.

It was the first do-or-die Game 7 to need extra time since Dallas beat San Antonio in the 2006 Western Conference semi-finals.

More in this category: « Chiefs secure a crucial win against North African powerhouse. McIlroy and DeChambeau just two off the lead after third round at Torrey Pines. »
back to top