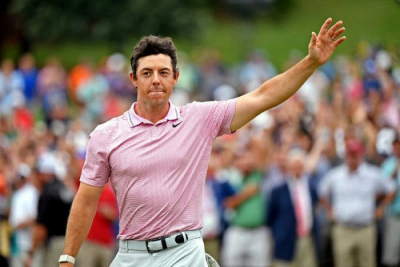 Rory McIlroy and Bryson DeChambeau made their move but Richard Bland's challenge faded as the US Open's third round set up a thrilling final day.

Louis Oosthuizen holed an incredible 50ft eagle putt on the 18th to take a share of the lead with Russell Henley and Mackenzie Hughes on five under.

McIlroy, champion in 2011, shot a four-under 67 and is two back alongside defending champion DeChambeau (68).

Joint halfway leader Bland carded a 77 to sit on one over at Torrey Pines.

The 48-year-old Englishman - who won his first European Tour title in his 478th event in May - had shared the 36-hole lead with Henley at just his second US Open.

The chasing pack features 17 players within five shots of the lead and is stacked with potential winners.

World number three Jon Rahm recovered from a double bogey on the 14th to post a 72 and end on two under, while top-ranked Dustin Johnson is one further adrift after a 68.

Exactly 10 years to the day after McIlroy won his first major, the 2011 US Open aged just 22, the Northern Irishman rolled back the years as his challenge in 2021 gathered momentum.

He birdied the second and 10th then holed a 30-yard chip from the rough on the 12th to get to two under par. Another birdie followed on the par-five 13th after his 270-yard second shot cannoned off the flagstick.

McIlroy fell back slightly after a wayward drive into a hazard led to his solitary bogey of the round on the 15th but he rallied to birdie the par-five 18th and put himself firmly in the mix.

"It's the best I've played all week," he told Sky Sports. "I stayed really patient and I feel like that patience was rewarded on the back nine."

McIlroy, who won the last of his four major titles at the 2014 US PGA Championship, added that another US Open title would "mean an awful lot" to him, saying he was "just so happy" to have given himself another chance.

"It's felt like a while since I've had a chance to win a major championship going into Sunday," he continued.

"It's not going to be quite as easy as it was 10 years ago but my game feels good and I'll try to do the same again."

Earlier, Ian Poulter sent a reminder to European Ryder Cup captain Padraig Harrington of his ability with a three-under 68 to end the day on level par.

Fellow Englishman Paul Casey is also level after a birdie on the 18th rounded off an excellent 67.