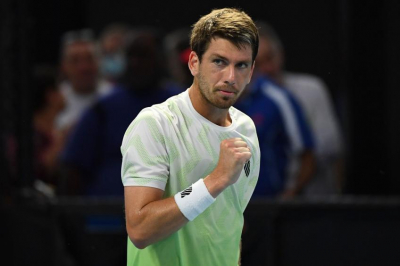 The British number two fought back after losing the first set to become the first player to take a set off Berrettini at the Cinch Championships.

But world number nine Berrettini, who fired down 19 aces, secured the crucial break in the third set to seal victory.

He is the first player to win the title on debut since Boris Becker in 1985.

Norrie, 25, was bidding to become only the second Briton after Andy Murray to win the Queen's title in the Open era.

The left-hander had never won a match at Queen's before this year but has made a big breakthrough by reaching his first grass-court final - and he still has a doubles semi-final, and potentially a final, to play later.

Norrie has won 29 matches and reached three finals this year, and will move up to 34 in the world rankings, which, because of the absence of Rafael Nadal and Milos Raonic, should be enough to earn him a seeding at Wimbledon.

Berrettini, who beat Murray and Dan Evans to reach the final, becomes the first Italian to win the Queen's title - the fifth of his career - and he will seek to emulate Becker by going on to lift the Wimbledon title.

"It's been an unbelievable week and to think of Boris Becker's name and my name together is crazy," said Berrettini. "I have been watching this tournament since I was a kid and it is a dream come true to win it.

"Cam is a great player and this year he has shown how he can play on all the surfaces. He's had a great week and I am sure he will win a title soon."

World number 24 Jabeur triumphed 7-5 6-4 against the fourth seed to become the first Arab woman to win a WTA title.

Victories for Jabeur and Samsonova mean there have now been 10 first-time singles winners on the women's Tour this year.

More in this category: « Max Verstappen triumphs in pulsating duel with Lewis Hamilton at French GP. Uganda Olympic team member tests positive for coronavirus on arrival in Japan. »
back to top