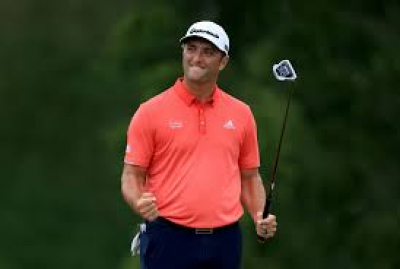 Spain's Jon Rahm claimed an incredible first major after finishing with back-to-back birdies on a breathless final day of the US Open at Torrey Pines.

Rahm, 26, roared at a wall of fans after his putt on the 18th took him to six under and gave him a one-shot lead over South Africa's Louis Oosthuizen.

Oosthuizen then bogeyed the 17th, meaning he needed to eagle the last to force a play-off but could only birdie.

Rory McIlroy and Bryson DeChambeau challenged but faded late on.

Both players held a share of the lead early in the round but were among many to struggle on the back nine, while Rahm was the only contender to not drop a shot in the closing holes.

The victory comes two weeks after he was forced to withdraw from a PGA Tour event he was leading by six shots after three rounds because of a positive coronavirus test.

The world number three said his main concern at that time was for his wife and two-month-old baby and it was them he celebrated with - on his first Father's Day no less - after the nerveless birdie putt saw him close out a four-under-par 67, the joint lowest score of the day.

"You have no idea what this means right now," he said to his son Kepa after hearing of Oosthuizen's closing birdie. "You will soon enough."

The leaderboard was congested after a flurry of birdies on the front nine, but players were fighting to avoid bogeys on the back nine.

Oosthuizen was the last to fall when he dropped a shot on the 17th and he could not repeat the sensational eagle he made on the 18th on Saturday, which had given him a share of the overnight lead.

The 38-year-old, who won the 2010 Open Championship, also shot a closing 67 but has now finished runner-up in a major on six occasions, including last month's US PGA Championship.

"It's frustrating. It's disappointing," Oosthuizen said. "I'm playing good golf, but winning a major championship is not just going to happen. You need to go out and play good golf."

Rahm played the back nine in two under par, carding seven pars before the grandstand finish saw him become the first Spaniard to win the US Open.

"I'm a big believer in karma and after what happened a couple of weeks ago, I stayed really positive knowing that big things were coming," said Rahm, who won his first PGA Tour event at Torrey Pines in 2017.

"I didn't know what it was going to be but I knew we were coming to a special place. I got my breakthrough win here and it's a very special place for my family.

"The fact my parents were able to come, I got out of Covid protocol early, I just felt like the stars were aligning."

Rahm dedicated his win to Spanish legend Seve Ballesteros, who claimed five major titles but died 10 years ago of brain cancer at the age of 54.

More in this category: « Italy complete perfect Euro 2020 group form with win over 10-man Wales. France's Ousmane Dembele ruled out of the EURO tournament due to injury. »
back to top