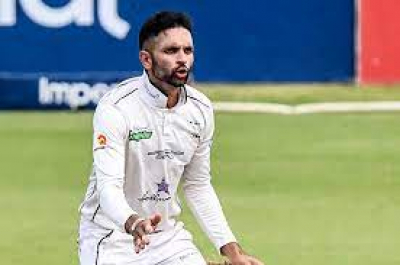 Keshav Maharaj became just the second South African to secure a Test hat-trick in a stunning finish to the first session on day four against the West Indies.

At one point in the first session, the West Indies looked in control at 90-2, but Kagiso Rabada then had Kyle Mayers caught superbly by Dean Elgar.

However, no one could have predicted the heroics that would follow from Maharaj.

The spinner, who had looked good all session, removed Kieran Powell for 51 (caught in the deep), removed Jason Holder first ball (bat pad), and then completed his hat-trick as Joshua Da Silva was superbly caught down the legside by Wiaan Mulder.

He's only the second South African in history to take three in three in Test cricket.

It left the West Indies reeling at 109-6 and the Proteas are now within grasp of a series victory.

More in this category: « England pair Mount and Chilwell to self-isolate after contact with Billy Gilmour. Netherlands' Wijnaldum,Depay team up to put three past North Macedonia. »
back to top