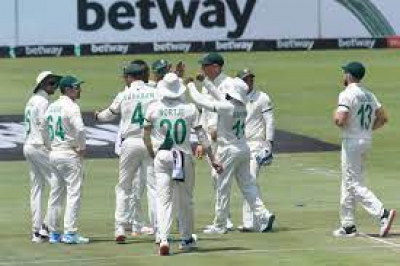 Keshav Maharaj picked up five wickets and claimed a historic hat-trick in the second Test in St Lucia, the West Indies crumbling under another impressive performance from the Proteas bowling unit getting them out in under two sessions to win by 158 runs.

Kagiso Rabada (3- 44) and Anrich Nortje set the tone perfectly for the visitors, bowling with intensity and venom rattling the Windies batters, especially Shai Hope. But it was the captain Kraigg Brathwaite (6) who fell first, Rabada striking in the ninth over and then aggressively bouncing out Hope (2) soon after.

Opener Kieran Powell and Kyle Mayers then launched an eye-catching counter-attack, but it was Rabada who again made the breakthrough after a false shot from Mayers (34). Their promising partnership took the Windies from 22-2 to 90-3.

Enter spinner Keshav Maharaj (5-35), with the score on 107-3, to make history by taking South Africa’s first Test hat-trick since readmission and the second ever after Geoff Griffin’s against England at Lord’s (1960). The first to go was form batter Powell (51), followed by Jason Holder and the history-making wicket was that of Joshua da Silva (0). Maharaj will be indebted to Wiaan Mulder after catching a blinder at leg slip for the hat-trick wicket. The Windies went into lunch at 109-6.

Still needing over 200 runs to win in the second session, the Windies tried to stifle the South African momentum but it did not last long enough – Lungi Ngidi got his first of the innings and the session. With Roston Chase injured and unable to bat, the Proteas needed two wickets to win. And it did not take too long as Maharaj picked up his fourth and then his fifth and helped bowl the Windies out for 165.

After another dominant performance, specifically by the bowling unit and Quinton de Kock, South Africa wrapped up the series 2-0.

Meanwhile India and New Zealand were frustrated by the weather again as another day of the World Test Championship final was completely washed out by rain.

Persistent rain hung around throughout the fourth day in Southampton until the abandonment came just before 15:00 BST.

A reserve, sixth day is in place so two days remain but a draw is now the clear favourite for the inaugural final.

More in this category: « NZ weightlifter Laurel Hubbard to become first transgender athlete to compete at Olympics. Royal AM will not honour PSL promotion/relegation play-off fixture - Mkhize. »
back to top