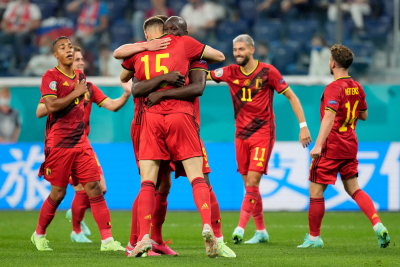 Belgium completed a perfect group campaign with a 2-0 victory over Finland at the European Championship on Monday.

An own goal and a Romelu Lukaku strike made the difference as the Belgians finished Group B play with nine points from three games as the head to the knockout stage. Finland, who finish the group in third, must await other results to learn if they will move on to the round of 16.

Belgium piled on relentless pressure all match and Lukaku looked to have finally broke the ice in the 65th minute with a confident strike from inside the box after being picked out by smart Kevin De Bruyne through ball. But a VAR review judged the Inter Milan striker was fractionally offside before the pass and overturned the goal.

Thomas Vermaelen helped make amends nine minutes later when his header from a De Bruyne corner kicked off the crossbar, hit Finland goalkeeper Lukas Hradecky and bounced into the net for the opening score.

Lukaku, then, got his goal soon after with a tidy turn and finish after receiving a De Bruyne pass with his back to goal -- the powerful striker beating Hradecky to the near post with a well-struck right-footed shot.

Meanwhile Denmark set up a last-16 tie with Wales in the European Championship after an emphatic victory over Russia on a frantic night in Copenhagen.

Knowing they needed to win and hope Belgium beat Finland, the hosts did not hold back and there were passionate scenes of celebration in Denmark.

Denmark finish second in the group.

The result also means Russia, who started the night in second place, finish bottom of the table and will not qualify.

Yussuf Poulsen had put Denmark 2-0 up, pouncing on a poor backpass from Roman Zobnin before Artem Dzyuba got one back for Russia from the penalty spot.

But Denmark confirmed their progression to the knockout stages when Christensen and Joakim Maehle made it 4-1 in a rampant three minutes.

More in this category: « Royal AM will not honour PSL promotion/relegation play-off fixture - Mkhize. Manchester City lining up bid for Tottenham Hotspur striker Harry Kane. »
back to top