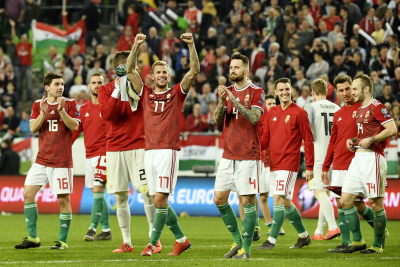 Earlier Germany and 13 other EU states condemned a Hungarian law that bans portraying homosexuality to under-18s.

Europe's football governing body has been criticised for not allowing Munich to use rainbow colours in the stadium.

Uefa said it had to deny the request given the political context in Hungary.

German press agency DPA said Orban had cancelled his trip to Munich and was planning to travel to Brussels instead, where an EU leaders' summit starts on Thursday.

There was no confirmation from the prime minister's spokesman, who said: "We do not provide information, now as before, on Viktor Orban's private programme."

Uefa rejected the request, insisting it was a "politically and religiously neutral organisation". It later added a rainbow to its logo and said Munich's request had been political, even though the rainbow symbol was not.

Uefa's refusal was derided as "shameful" by Mayor Dieter Reiter, while Green party leader Annalena Baerbock called for rainbow colours to be displayed across Germany as a "strong message of diversity".

Bavarian Premier Markus Söder said Germans had to "stand up against exclusion and discrimination" and Munich's gay community said rainbow flags would be handed out to fans outside the Allianz Arena ahead of the match at 19:00 GMT.

German captain Manuel Neuer, who wore a rainbow armband for the first two games, will continue to do so.

A number of stadiums in Germany have said they will light up in rainbow colours, and Munich town hall tweeted a picture of rainbow flags hoisted outside the building.

More in this category: « BNP Paribas RCS rising tennis star poised for biggest competition. Spain into knockout stage with dominant win over Slovakia. »
back to top