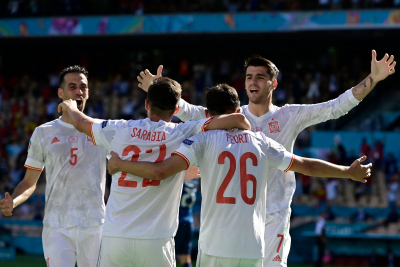 Spain earned their first win at Euro 2020 in style as they thrashed Slovakia to progress as Group E runners-up and set up a last-16 tie with Croatia.

Luis Enrique's side head into the knockout stages on the back of their best attacking display of the tournament, proving far too good for a seriously below-par Slovakia.

Aymeric Laporte, Pablo Sarabia and Ferran Torres all scored after a bizarre own goal from Newcastle's Martin Dubravka broke the deadlock at La Cartuja Stadium in Seville.

The Slovakia goalkeeper, who earlier saved a penalty from Alvaro Morata, punched the ball into his own net after Sarabia's effort hit the crossbar and looped into the air.

Juraj Kucka inadvertently completed the rout for Spain, bundling the ball over his own line from close range.

Spain's meeting with Croatia will take place in Copenhagen on Monday at 17:00, while Slovakia are out.

Meanwhile substitute Viktor Claesson scored a 93rd-minute winner for Sweden to knock Poland, who had come back from 2-0 down, out of Euro 2020.

The RB Leipzig midfielder doubled the lead with a first-time shot - his third goal at the tournament - before Robert Lewandowski, who had earlier missed a golden chance, produced a quality arrowed finish to give Poland hope.

Lewandowski hit an 84th-minute equaliser to give hope to Poland, who needed to win to advance, but they were undone by Claesson's late winner.

In a captivating game, captain Lewandowski was guilty of an incredible miss at 0-0.

After heading against the underside of the bar from a corner, the prolific Bayern Munich forward's follow up header from the rebound struck the bar from just two yards out.