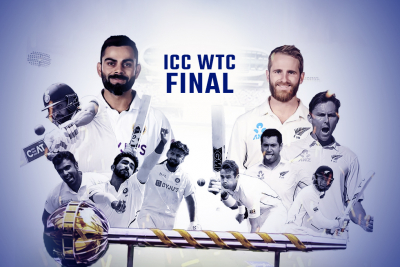 New Zealand were crowned the first Test world champions after completing a stunning eight-wicket win over India on a dramatic sixth day of the final in Southampton.

A draw looked likely when play began but New Zealand dismissed India and completed a tricky chase of 139 with relative ease as time ran out.

India resumed 64-2, 32 ahead, only for Kyle Jamieson to remove captain Virat Kohli and Cheteshwar Pujara before their lead had passed 40.

Rishabh Pant gave India hope with a counter-attacking 41 but skied a catch to Henry Nicholls, who clung on brilliantly running back from gully.

Pant's wicket sparked the loss of the last four wickets for 14 runs and left India 40 short of what would have been a challenging target.

Williamson, who crucially overturned an lbw dismissal when on one, finished 52 not out and Taylor, put down on 27 by Pujara, unbeaten on 47 as New Zealand won with seven overs left.

It saw New Zealand topple cricket's superpower India and claim the biggest win in their history - their first triumph in a major global cricket tournament.

The action on the reserve day, needed because of all the time lost to the weather earlier in the match, also provided a fitting finale to the World Test Championship which was introduced in 2019 to provide greater context to the world's oldest and longest format.

The pair replace Australians David Warner and Marcus Stoinis, who pulled out because of Covid-19 restrictions.

De Kock, 28, is one of the world's best white-ball batters, who has played 223 times for South Africa and has scored more than 9,500 international runs.

Conway, 29,scored 200 on his Test debut against England this month.

More in this category: « Spain into knockout stage with dominant win over Slovakia. Portugal's Cristiano Ronaldo ties international goals mark in France draw. »
back to top