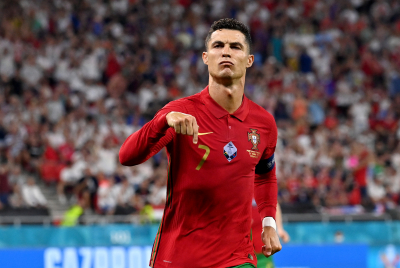 Cristiano Ronaldo reached another famous landmark as his two penalties against France took him to 109 international goals, a joint world record for men's football.

Ali Daei, who scored 109 goals for Iran between 1993 and 2006, and Ronaldo are the only two male players to score 90 or more international goals.

This is the latest landmark to push the argument for the 36-year-old Portugal player to be considered an all-time great.

He is already the top scorer in club football's top tournament, the European Cup/Champions League, a trophy he has won five times.

Against France he became the top European scorer in men's major tournaments with 20 goals across Euros and World Cups.

He also became the top scorer in European Championship history against Hungary on Tuesday, 15 June and his tally is up to 13 now.

He is the top scorer in World Cups and European Championships combined, overtaking Miroslav Klose's record of 19.

Almost half of Cristiano Ronaldo's goals have come in the final 30 minutes of games.

Some 89 of his goals have been inside the box with 20 from outside. He has scored 14 penalties and nine free-kicks.

Lithuania and Sweden (seven each) are the sides he has scored the most against.

Meanwhile Germany will face England in the last 16 of Euro 2020 after twice coming from behind to knock battling Hungary out of the tournament.

An outstanding header by Adam Szalai, who plays his club football in Germany for Mainz, had given Hungary a shock lead in Munich.

Andras Schafer thought he had won it for the Hungarians with a header - 90 seconds after Kai Havertz had equalised - before substitute Leon Goretzka made it 2-2 six minutes from the end.

It means Germany finish second in Group F and will now meet Gareth Southgate's England at Wembley in a hugely anticipated last-16 match next Tuesday (17:00 BST).