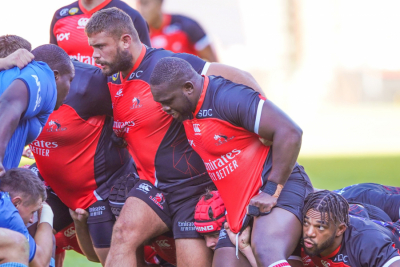 The Lions bounced back from their harrowing defeat in Nelspruit in the first round by beating DHL Western Province 38-32 in what for most of the way was a one-sided Carling Currie Cup match at Emirates Airline Park in Johannesburg on Wednesday night.

That scoreline might suggest it was a close game, and in the final few minutes it was as WP took advantage of a two-man numerical advantage after the Lions paid for their late match indiscipline by being shown two yellow cards in the space of a few minutes. They turned a 38-10 game into a six-point deficit with two tries and a penalty try plus a Tim Swiel penalty.

But, as that initial scoreline suggests, it was mostly the Lions who dominated as they turned in a performance that was light years better than what they produced when they were thrashed 39-10 by the unfashionable Pumas on the opening weekend at Mbombela Stadium. The Lions came out with a point to prove while WP looked distinctly shell-shocked and played like a team that just hadn’t pitched for work during the first half.

The Lions were strong in all areas of the game from the outset, with WP being denied possession and territory as a young but hungry home forward pack laid the foundations for their initial big lead and then ultimately the win. By doing better than expected in the forward battle the Lions were able to capitalise on some pretty inept defensive work from WP.

Perhaps that was the warning sign that should have been heeded by those of us who expected Province to win this game even though it was an away fixture for them. Against the Vodacom Blue Bulls last week, WP conceded four tries to give away a bonus point. Normally at Loftus that wouldn’t seem so bad, but that was a Bulls team that was made up largely of club players due to the fact that the first choice Bulls were about to be slaughtered in Treviso later that same night.

Certainly, it's hard to remember when last a WP or Stormers team looked so poor defensively, with structural problems when the Lions ran wide being matched by the visiting team’s inability to front the Lions’ physicality at the contact points.

The Lions dominated possession at the start of the second half and increased their lead to 28 points through a second try to PJ Botha followed by an intercept try from Sibusiso Maxwane. The intercept was the product of excellent defence from the Lions and that was another area where they were infinitely better than Province on the night.

They later lost the plot in that department though, understandably perhaps if you consider they were down to 13 men when most of the WP work towards their eventual two consolation bonus points - one for scoring four tries and the other for losing by less than seven - was done. In the final minutes WP looked like they were capable of running through the Lions defenders at will, but the Lions regained their composure just in time and were able to survive a long, sustained WP last-ditch attack off the last move of the game before reserve hooker Jaco Visagie forced a turn-over penalty.

As a warm-up to the first British and Irish Lions tour game, this performance should more than suffice for the local version of the Lions, who may have caused their coach a few selection dilemmas as he prepares to welcome back several injured and previously Covid-impacted players in their marquee game on 3 July.

More in this category: « Brazil's Casemiro nets last-gasp goal to beat Colombia at Copa America. Trae Young scores 48 points to lead Hawks to Game 1 win over Bucks. »
back to top