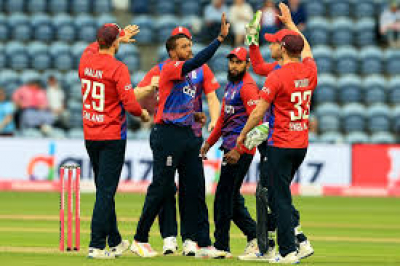 England recovered from 36-4 to beat Sri Lanka by five wickets in the second Twenty20 and win the series with a game to spare.

After a 40-minute rain break at 69-4, the hosts completed a revised chase of 103 with 11 balls remaining in Cardiff.

Liam Livingstone finished 29 not out after Sam Billings - his partner in a fifth-wicket stand of 54 - fell for 24.

Although England were not as ruthless as in Wednesday's eight-wicket triumph, victory was rarely in doubt after they limited Sri Lanka to the lowest total they have conceded in a T20.

Livingstone - batting at six rather than the opening spot he occupies for Lancashire - and Billings had lifted England ahead of the Duckworth-Lewis-Stern target by the time rain arrived, and Sam Curran capped a successful 24 hours for England with a straight six to seal the win.

The final game in the three-match series takes place at the Ageas Bowl on Saturday.