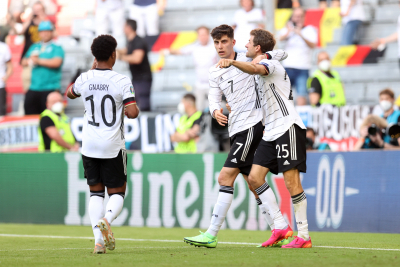 With Germany's UEFA Euro 2020 campaign soon underway, we look at five players central to their hopes of lifting the trophy: from returning duo Thomas Müller and Mats Hummels, to captain fantastic Manuel Neuer, and his Bayern Munich teammates Serge Gnabry and Joshua Kimmich.

The 2021 Bundesliga assist king is back in the Germany set-up after a two-year absence, ready to be the "catalyst" in Joachim Low side as the latter looks to bow out of his position as head coach with a European Championship winners' medal.

Müller has already added to his century of caps after returning for the 1-1 draw with Denmark and the 2014 FIFA World Cup winner will be hoping to now top up his 38 goals and 36 provisions for Die Mannschaft, starting with Monday's friendly meeting with Latvia.

Müller's leadership qualities will be just as vital to the cause - both on and off the pitch - and make the 10-time Bundesliga champion an invaluable member of the set-up.

Neuer is equally essential to German hopes of success, as he approaches becoming the first goalkeeper in the country's history to earn 100 caps.

The 35-year-old gloved libero has 43 clean sheets to his name in the Germany goal, and few on the planet would argue against Neuer's case as the best goalkeeper the world has ever seen.

Löw's skipper will orchestrate proceedings from the back, while sweeping up any danger that comes his way and his presence will be as reassuring for his teammates as it will be daunting for his opponents.

Make note of those two positions listed above, as whether Kimmich is operating on the right side of defence or in the centre of midfield, his impact will be substantial.

He's arguably the best in the business in either role, with Hansi Flick this time the man capable of adding weight to that suggestion in a recent interview with 51, the official Bayern Munich magazine.

Flick said: "He can become the world's best player... He's already a world-class player in several positions but he can take another step - and I hope he does."

Kimmich's delivery - from both dead and moving balls - will also pose serious questions of the upcoming opposition and the man who averaged more touches per 90 minutes than any other player in the Bundesliga last term will be looking to continue orchestrating proceedings from the get-go when Euro 2020 gets going.

Only Robert Lewandowski (41) and Müller (11) scored more times for Bayern than Gnabry in the league last season as the club wrapped up a ninth Meisterschale on the spin.

It highlights the Stuttgart-born forward's growing potency, and subsequent importance for his side in being able to convert chances into goals, goals into points, and points into prizes.

Gnabry has transferred that added devastation to his game into the national team, as highlighted by his 15 strikes in just 20 appearances for Die Mannschaft. Throw a further six assists into the mix and the 25-year-old's 21 goal involvements work out as a Gnabry-crafted Germany goal every 81 minutes.

That makes him the most dangerous player in the team going into an international tournament that will require important contributions at crucial junctures, in order to settle matches by the finest of margins.

Another influential figure brought back into the fold, Hummels could well be the final piece of the jigsaw for Germany.

His inclusion not only brings with it his reassuring presence, but a total of 71 caps, and the experience of a World Cup, Bundesliga (five times) and DFB Cup winner. Furthermore, the Dortmund man was one of the Bundesliga's leading defenders in 2020/21, winning more tackles (386) and headers (168) than any other centre-back in the league.

Hummels' ability on the ball will be a major asset in allowing Germany to build from the back and rely on their 6'2" defender in tight situations to not only play his way out of trouble but also launch attacks of their own.

As Hummels explained previously, world football's original defensive quarterback is always on the lookout to make those arrowing, defence-splitting long balls out of defence, a weapon in the German arsenal that he believes will help "against well-organised opponents who press the ball high, you can still find solutions."

More in this category: « Harris and Anderson to carry South African Flag at Wimbledon. Mo Farah fails to qualify for Tokyo Olympics 2021 after missing 10,000m race time. »
back to top