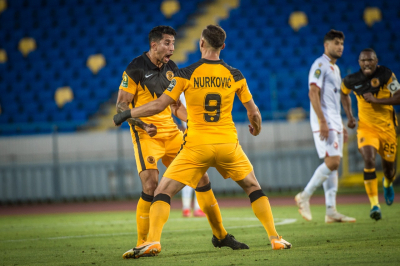 Kaizer Chiefs interim coach Arthur Zwane says his squad remains focused on their objectives to capitalise on their narrow 1-0 advantage in a return-leg clash against Wydad AC at FNB Stadium.

Zwane and Dillon Sheppard are set for their fourth game in charge since the sacking of Gavin Hunt, with three wins under their belt, which includes the historic 1-0 win in Casablanca of the first leg of the semi-final.

In the build-up to the game, Zwane admitted new head coach Stuart Baxter who's unable to be in the technical area, has played his part along with every member of the technical team and revealed they feel adequately prepared for the Moroccan giants on Saturday afternoon.

"They are the ones who are chasing and they definitely want to score and obviously they will be open at the back as it happened in the first leg," Zwane said in the pre-match press conference.

"We managed to score because we waited for the right moment, we had about three or four [chances] and we managed to convert one of the opportunities. We hope that playing at home we'll manage to get another one or two and make sure we don't concede."

"We also know we have a lot of challenges in our country at the moment in terms of Coronavirus.

"What is key is ensuring everyone is focused on the tactics and on the planning going forward. It"s been so far so good in terms of the response of the players.

"Everyone is 110% focused and looking forward to the second leg."

Zwane admitted that this second leg won't be like the return leg in Dar es Salaam against Simba in the quarter-finals where they held a four-goal advantage from the first leg and emphasized the need to keep a clean sheet if they have any chance of beating the two-time African champions.

He further added that he sees similarities in the belief the squad from the class of 2001 which won Africa Cup Winners Cup.

Chiefs face Wydad Casablance for the return leg this afternoon at FNB Stadium with kickoff scheduled for 18h00.

More in this category: « Russian Grand Prix to move from Sochi to Autodrom Igora Drive in St Petersburg. Alaphilippe goes long to win crash-marred Stage 1 of Tour de France. »
back to top