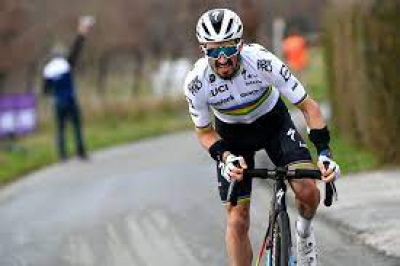 Julian Alaphilippe sprang a superb late attack to win stage one of the Tour de France after two huge crashes in the closing stages.

The 2020 runner-up Primoz Roglic, and Britain's Chris Froome were among those to fall in two separate incidents in the final 45km.

The 197.8km run from Brest to Landerneau had been uneventful until a fan holding a placard sparked the first mass pile-up.

The second crash came 8km from the end.

Both caused severe disruptions to the race, the first coming when Jumbo-Visma's German rider Tony Martin was sent tumbling near the front of the main bunch, causing chaos behind him with riders and bikes strewn across the tarmac.

It took almost a full 25 kilometres for a bloodied and bruised peloton to fully regroup, with DSM's German rider Jasha Sutterlin becoming the first to abandon the race.

Overall contenders Tao Geoghegan Hart of Britain, as well as Colombian Miguel Angel Lopez, were among the riders to be held up before a second crash, this time at high-speed, on a descent before the climb up the Fosse-aux-Loups, ripped through the peloton again.

Froome was among the worst affected, with the four-time Tour winner gingerly getting back on his saddle and crossing the line over 14 minutes down.

It was also hardly an ideal opening day for Ineos Grenadiers, with Richie Porte losing over two minutes and Geoghegan Hart, conceding more than five - a situation which may necessitate a change in tactics later in the race.

The bright spot for the British team came via Geraint Thomas, who looked impressive on the final climb, steering clear of trouble to finish eight seconds behind Alaphilippe.

"It’s really incredible, honestly. It’s a scenario I imagined and the start of my Tour is a success. It’s a super feeling, my team did great work, they took care of me and controlled things. In the final, I was caught up in a crash but I was able to stay calm and then I had to finish off the work on the final climb, where we really wanted to make it hard and get rid of the sprinters. When Dries opened the gap I gave the maximum without asking any questions,” the yellow jersey said at the finish.

"It wasn’t planned to go from that far but when I went I saw I had a small gap and I saw everyone was à bloc so I decided to keep going. In the final kilometre, I saw the gap wasn’t coming down. Every time it’s an emotion I can’t describe."

"It’s a joy for me to win but also to give emotions to those close to me. This is really a special win for me."

More in this category: « Chiefs aims to capitalise on their narrow 1-0 advantage against Wydad AC. Livestream: CAF Champions League - Kaizer Chiefs vs Wydad Casablanca. »
back to top