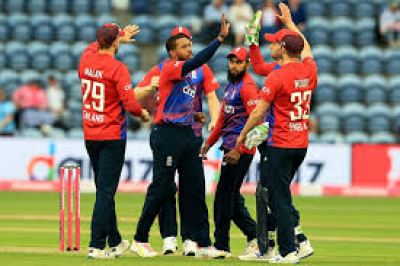 Dawid Malan hit 76 from 48 balls as England thrashed Sri Lanka by 89 runs in Southampton to complete a 3-0 clean sweep in the Twenty20 series.

Although England lost 5-19 late on, the target proved beyond a Sri Lanka side who were outplayed in all three games.

They were bowled out for 91 with seven balls unused as David Willey took 3-27 and Sam Curran 2-14.

Willey had Danushka Gunathilaka caught at second slip with the second ball of the innings and Sri Lanka subsided in embarrassing fashion after a chaotic start.

Chris Woakes, recalled for this series after a six-year absence, claimed 1-9 - the most economical four-over spell by an England bowler in T20s - while Sam Billings underlined a ruthless all-round display for the hosts with a brilliant direct hit run-out from deep mid-wicket.

It was England's fourth biggest win in terms of runs in T20s, while Sri Lanka's total was their fourth lowest.

The sides meet at Emirates Riverside on Tuesday in the first of three one-day internationals, and the evidence of the past four days suggests Sri Lanka face a mighty task against the world champions.