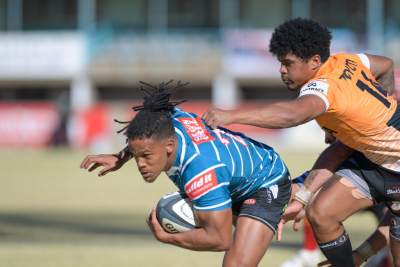 Griquas opened their account in the Currie Cup by outplaying a young Cheetahs team in a bonus-point victory in Kimberley on Saturday.

A strong defensive performance by the men from Kimberley laid the foundation for the result. Griquas lost their opening round match against the Sharks last week, while this was the first outing for the men from Bloemfontein.

The Cheetahs came into the game fielding 13 debutants,  due to positive Covid-19 cases in the camp, as well as several injuries.

It certainly was not a game that lacked for opportunities but, especially in the first half, both teams made too many mistakes in the red zone which cost them those chances.

The only try in the first half was created by Griquas left wing Eduan Keyter whose fine side-step and line-break suddenly created a huge pocket of space for full-back Masixole Banda who needed none of his searing pace as he trotted over unchallenged.

Free State bounced back into the contest early in the second half when debutant eighthman Gideon van Wyk burst over the line from the back of a maul and, with Ruan Pienaar converting, the visitors were briefly in the lead at 10-7.

But Griquas outside centre, debutant Jay Cee Nel, crashed through three tackles and had the pace to beat the cover defence with 20 minutes to go to retake the lead and replacement loose forward Mzwanele Zito produced some tight support play and was on hand for the third try just minutes later.