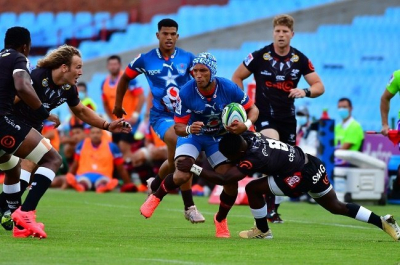 Aplon, who has just returned from a long layoff following an ACL injury, injured the same knee again during the clash.

He was lying with his arm over his face in disbelief… Aplon was helped up and limped off the field, and Bulls coach White fears the worst.

"It’s his knee again. He did his ACL (previously), and it’s the same knee. I'm not quite sure (how bad it is). But you can imagine at his age now, the recovery time… If he’s out for another couple of months, the chances of him coming back again are very slim," the Bulls boss said.

"I don’t want to be the prophet of doom, but I’ve been in the change-room enough to know that sometimes it ends like that, and it’s not ideal. You want to end holding the Currie Cup or a trophy above your head and walk away. But sometimes you can’t ever write your script the way you want it to be."

"I’ve got to say I feel for him… it doesn’t look good. He rushed himself back – not gung-ho rushed himself back. He just wanted to get back on to the field so badly. He worked hard, he’s so dedicated. He spent some time with his family in Cape Town.

"He lived here and spent every day he could in the gym with the rehab staff, and really wanted to be part of the team again."

"If it is over he wouldn’t have wanted it to end like that, but at least in his heart he knows he’s won enough trophies in his life and he’s been successful at the Bulls in the short time he’s been here," White added.

Aplon is currently 38, and will turn 39 in October. Just last week, ahead of the Rainbow Cup final in Treviso, he said he was not sure when he would call it a day.

However having played 17 Tests for the Springboks, become a Stormers legend, and played in France and Japan, Aplon wanted to make one final contribution to the game on home turf. But now he may not get that chance to retire on his own terms.

Look, I want to stress that he was always helping me out as a senior player. Our backline, with David Kriel and Stravino Jacobs, and Zak Burger and Keagan Johannes… The make-up of our (backline) – Duffy Kellerman, JC Nel who was here and Marnus Potgieter – was very young, and I realised that I needed an older, wiser guy to come into the team," White said.

He knew it was always a risk for him. He wanted to be part of it. I don’t have to tell you this – he is a fantastic human being, fantastic rugby player. Should have played 100 Tests for South Africa. I’ve been lucky enough to coach him in Japan as well.

The Bulls next face the Cheetahs in the Currie Cup on Wednesday and followed by the small matter of a clash against the British and Irish Lions.

More in this category: « Alun Wyn Jones ruled out of Lions tour to South Africa with a dislocated shoulder. Suns outlast Clippers to move to brink of NBA Finals since 1993. »
back to top