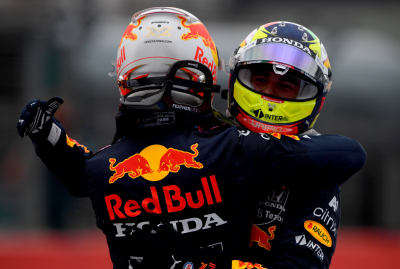 Max Verstappen has won the Styrian Grand Prix, claiming his fourth win of the season and Red Bull’s fourth win in a row.

The Dutchman extended his lead on Lewis Hamilton in the Drivers’ Championship to 18 points, with the Mercedes driver finishing in second and Valterri Botas finished in third, joining the Championship contenders on the podium.

Hamilton in his Mercedes had no answer to his rival, and dropped back through a largely uneventful race.

It was bad news for the seven-time champion, with Austria's Red Bull Ring hosting a second race next weekend.

Verstappen claimed pole position yesterday for the first time at the team’s home track and took revenge over their German rival’s as Mercedes claimed victory in both races at the Red Bull ring last season.

Lando Norris was in fifth place, ahead of the Ferrari duo of Carlos Sainz and  Charles Leclerc. Lance Stroll took the next place, with Fernando Alonso and Yuki Tsunoda rounding off the scoring places.

A train was set in the midfield in a battle for seventh place, involving six drivers, for the first third of the race. Alonso led George Russell, Tsunoda, Sainz,Sebastian Vettel and Kimi Raikkonen until the pit window was open and changed the whole midfield standings.

Hamilton almost lost the rear of his car at the exit of turn four, dipping his left rear tyre into gravel, but was able to counter the oversteer and lose minimal seconds on Verstappen in the lead.

Russell retired from the race on lap 39 after incurring some issues with the Wlliams' car, the young Brit was running comfortably in eighth for the first third of the race until the issues occurred.

Leclerc started in seventh place but dropped down to the bottom of the grid at the end of the first lap due to wing damage, but a gutsy performance from the Ferrari driver saw him move up the grid throughout the whole race.