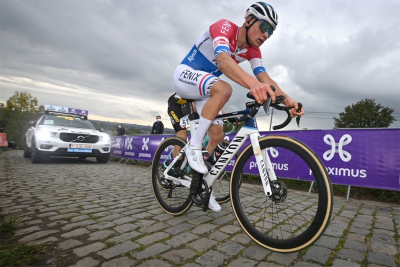 The Dutchman, 26, staged two attacks and powered home in a thrilling climax to the 183.5km route.

As he crossed the line, Van der Poel pointed to the sky in tribute to his late grandfather, Tour de France great Raymond Poulidor.

Van der Poel, riding on only his second day on the Tour, takes the yellow jersey from Julian Alaphilippe, who won Saturday's crash-affected opening stage and finished stage two in fifth.

Due to taking the 10 bonus seconds on the line, and the eight he claimed on the first ascent of the climb, the Dutchman moves into yellow with an advantage of eight seconds to Alaphilippe.

An emotional Van der Poel was in tears after the race, honouring the victory to his late grandfather Raymond Poulidor who finished on the Tour’s podium eight times but never wore yellow. "I have no words, really," he sobbed. "It’s incredible."

Meanwhile as the riders took to stage two, French police launched an investigation into the multi-rider pile-up on Saturday which was caused by a spectator who leant into the path of the speeding peloton while holding up a sign.

The police said they intend to charge the unnamed spectator with "unintentional short-term injury through a manifestly deliberate breach of a duty of safety or care".

Fans have lined the streets over the first two days following the relaxation of French coronavirus restrictions.

"We are suing this woman who behaved so badly," said Tour deputy director Pierre-Yves Thouault.

"We are doing this so that the tiny minority of people who do this do not spoil the show for everyone."