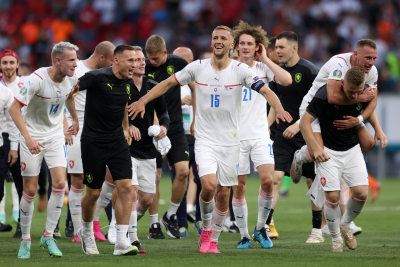 The Czech Republic pulled off the shock of the European Championship so far by defeating the Netherlands and booking their place in the last eight after defender Matthijs de Ligt was sent off.

Tomas Holes and Patrik Schick scored in the second half to set up a clash with Denmark in Baku next Saturday for a place in the semifinals.

The Czechs progress into the last eight of the competition for the first time since Euro 2012.

Holes then turned provider for Schick as the Czechs doubled their lead on 80 minutes.

Netherlands found themselves down to 10 men moments later after a long VAR check adjudged De Ligt to have denied Schick a goalscoring opportunity with a handball outside of the box.

It was the first time a Netherlands player had been shown a red card at the Euros since John Heitinga against the Czechs in 2004.

But the Czech Republic, ranked 40th in the world, 24 places behind the Dutch, went on to silence those in orange at the Puskas Arena in Budapest, setting up a quarter-final with Denmark on Saturday, 3 July.