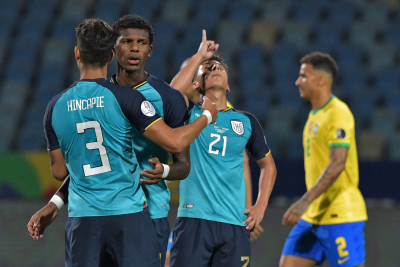 Copa America hosts Brazil saw their 10-game winning run come to an end as they drew 1-1 with Ecuador in Goiania.

The point took Ecuador into the quarter-finals, with holders Brazil having previously booked their place in the knockout stages.

Eder Militao headed Brazil into the lead from Everton Soares' free-kick for his first international goal.

But Angel Mena rifled home from Enner Valencia's flick-on to equalise and send Ecuador through.

Ecuador had only needed to match Venezuela's result against Peru - who had already qualified - in Sunday's other game.

Andre Carrillo scored the only goal in that encounter as Peru won 1-0.

Both Brazil - who had won every game since November 2019 - and Ecuador must wait until Group A is over before discovering their quarter-final opponents. Only two of the 10 competing teams go out at the group stages.

The quarter-final matchups will be decided on Monday after the final round of Group A fixtures.

On Monday in Group A (01:00 BST on Tuesday), Bolivia face Argentina and Uruguay play Paraguay.

Argentina,Chile, Paraguay and Uruguay and have already guaranteed their place in the last eight, while Bolivia are already out, having lost all three of their games so far.

More in this category: « Proteas level series as George Linde, Tabraiz Shamsi squeeze West Indies. Rassie Erasmus says there is 'no threat' to British and Irish Lions 2021 Tour. »
back to top