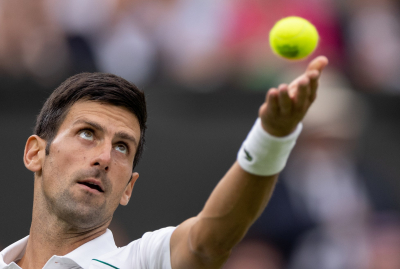 Defending champion Novak Djokovic overcame an early fright to fend off British teenager Jack Draper and launch his quest for a sixth title as Wimbledon returned after a two-year absence on Monday.

The first match on Centre Court since Djokovic's nailbiting victory over Roger Federer in the 2019 final -- 716 days ago -- was classic David versus Goliath material.

Draper was given a wildcard for his senior SW19 debut and stunned the Serb top seed with a confident start.

It was the first set that 34-year-old Djokovic had dropped in the Wimbledon first round since 2010.

Djokovic will play either South Africa's Kevin Anderson - who he beat in the 2018 final - or Chilean qualifier Marcelo Barrios Vera in the second round.

"It feels great seeing everyone and being back on the most special, or sacred, tennis court in the world," said Djokovic, who is aiming to equal Rafael Nadal and Roger Federer's all-time men's record of 20 major titles.

"It has been very difficult times for everyone but I'm very glad the sport is back, hopefully you guys enjoyed it and will enjoy the next couple of weeks."

The Championships has returned after being cancelled last year because of the coronavirus pandemic and Centre Court is allowed to hold 50% of its 15,000 capacity as part of the government's event testing programme.

That led to a special moment before Djokovic and Draper walked out in the opening match on Centre. The crowd gave a spontaneous and prolonged standing ovation when it was announced NHS workers and scientists responsible for developing vaccines were sat in the Royal Box.