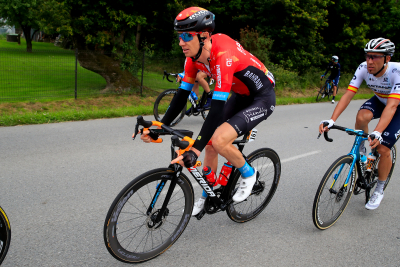 Geraint Thomas and Primoz Roglic were both involved in crashes as Tim Merlier won a dramatic stage three of the Tour de France.

Thomas dislocated his shoulder early on the 182.9km stage, while Roglic lost time after falling in the final 10km.

Caleb Ewan also crashed late on, taking down former world champion Peter Sagan as both wound up for a sprint finish.

"I'm living a dream I think," said Merlier, who has now claimed maiden stage wins at both the Tour and Giro d'Italia this year.

"After the Giro I was already really happy and now I win a stage on the Tour, the biggest race in the world. I can't believe it."

A relatively flat parcours had promised a largely uneventful day, with fireworks expected on the final sprint where Mark Cavendish was hoping to collect his 31st stage victory, five years on from his last.

However, it proved anything but uneventful with Jumbo's-Visma's Robert Gesink being forced to abandon as a consequence of Thomas' fall inside the opening 50km.

The Welshman looked in agony as he sat on the tarmac but eventually carried on after receiving roadside attention to put his shoulder back in place, bridging a three-minute-plus gap to regain contact with the peloton after team-mates dropped back in support.

As sprint trains assembled and with the peloton at full speed, Groupama-FDJ's French rider Valentin Madouas fell with 12km remaining, causing a snarl-up which denied Cavendish, who damaged his bike, the opportunity to contest the final sprint.

Roglic hit the deck painfully 10km from the line while defending champion Tadej Pogacar was held up by a crash that ended Jack Haig's Tour.

Twitter
More in this category: « Djokovic shows his title-winning class after Draper takes first set in Wimbledon opener. Junior Athletes celebrate the spirit of legendary Zithulele Sinqe alive in streets of Westonaria. »
back to top