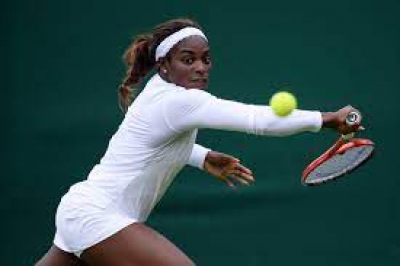 Sloane Stephens produced a complete display to land a shock first-round win over two-time champion Petra Kvitova on day one of Wimbledon.

The American repeatedly made Kvitova work in the opening set, which she took 6-3 after two breaks of serve.

Stephens ruthlessly broke the Czech's serve in the next game and progressed, taking the second set 6-4.

Stephens, the 2017 US Open champion, said: "Seeing the first round I thought, 'oh boy, this will be a difficult task'.

"It's been a couple of years since I've had a good result on grass. Here is a good start beating a really good grass-court player."

Stephens - ranked 63 places below world number 10 Kvitova - looked consistent in all aspects of her game in this Centre Court battle between two previous Grand Slam winners.

By contrast Kvitova - champion at SW19 in 2011 and 2014 - seemed to struggle with her timing and a number of mis-hits featured in her play on a day when she made 20 unforced errors.

Meanwhile day one's rain-disrupted schedule meant Venus Williams' and Czech eighth-seed Karolina Pliskova were unable to play their respective matches but other seeded players got their tournaments under way.

Spain's Garbine Muguruza - 11th seed and the 2017 champion - dropped one game on her way to a 6-0 6-1 win over France's Fiona Ferro, while Kazakhstan's Elena Rybakina proved too strong for France's Kristina Mladenovic, winning 6-4 6-0.

Romania's Halep, who pulled out with a calf injury on Friday, announced on Monday that the problem would also rule her out of next month's Tokyo Olympics.

The Briton could not convert two match points and wobbled as Basilashvili, 29, fought back to force a fourth set.

After a break to shut the Centre Court roof, Murray returned reinvigorated to win 6-4 6-3 5-7 6-3 under the lights.

More in this category: « Spain into Euro 2020 quarters after scintillating win over Croatia. France out of Euro at hands of Switzerland after Kylian Mbappe shootout miss. »
back to top