France out of Euro at hands of Switzerland after Kylian Mbappe shootout miss. 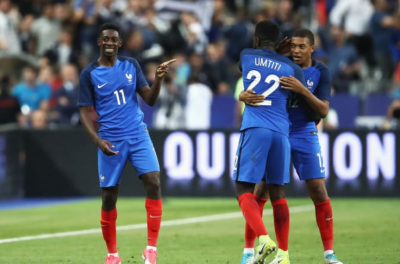 Kylian Mbappe had a decisive miss from the penalty spot as Switzerland ousted World Cup champions France from the 2020 European Championship in a shootout on Monday night after regular and extra time ended in a 3-3 draw.

France looked uninspired throughout the remainder of the first half as Switzerland took a 1-0 lead into the break.

The Swiss had a chance to double their lead early in the second half when VAR determined that Zuber had been fouled on the edge of the area, but Lloris went down and to his right to keep out Ricardo Rodriguez's spot kick to keep France in the game.

Soon after France were level, when Benzema made a sublime first touch on a pass into the box from Mbappe and then poked home past Switzerland's Yann Sommer.

And just like that, France took the lead through another Benzema goal, this time the Real Madrid striker nodding in on the goal line from an Antoine Griezzmann rebound that was parried into his path by Sommer.

"Honestly I am still in shock," said Sommer, who became the most capped Swiss keeper with 65 international appearances. "We showed courage, heart, we left everything out there.

"When you come back from two goals down against the world champions it is just unbelievable, and then to win on penalties, I could not be prouder of the way we did it."

Paul Pogba, who'd been a force for France throughout the tournament, looked to have put matters to bed in the 75th minute, picking up a loose ball well outside the area and curling in a lovely shot from distance past Sommer to double the lead for Didier Deschamps' side.

"We did what we needed to in order to go 3-1 up and then we showed weakness, something unusual for us. Losing on penalties is always cruel for a team," Deschamps said after the match.

"Kylian Mbappe is incredibly sad, as are all the players, but nobody can be upset with him as he took on the responsibility of taking the fifth penalty."

However, Seferovic headed home his second of the game just after 80 minutes when he latched onto a lovely curling cross from the right flank to give Switzerland a lifeline and substitute Mario Gavranovic netted a stellar goal shortly after to send the game to extra time.

Mbappe spurned a golden chance to seal the win in extra time after being played in by Pogba, but his shot from a tight angle slammed into the side netting and the game was decided from the penalty spot.

With everything riding on his spot kick, Mbappe saw his effort saved by Sommer to complete the remarkable comeback for Switzerland and send France home from the Euro.

"Nobody believed in us anymore at that stage," Sommer said. "We felt France had become a bit complacent and maybe thought they had already won it. So we used that to our advantage."

"It's hugely disappointing. We completely messed up our first half. We reacted in the second half but then left them space and they came back," he said.

"Penalties are a lottery. We could have scored in extra time as we had the chances to do that."

Next up for Switzerland is a quarterfinal match against Spain, who beat Croatia 5-3 in an extra time thriller earlier in the day.