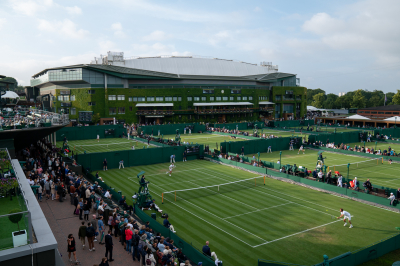 World number one Ashleigh Barty held off a spirited Carla Suarez Navarro to reach the second round at Wimbledon.

Spain's Suarez Navarro, playing in her second match since recovering from cancer, was given a standing ovation by the Centre Court crowd as she departed.

Top seed Barty served for the match at 5-4 in the second set but Suarez Navarro, 32, found extra energy, playing a perfect tie-break to force a decider.

However, the 25-year-old dialled back in for the third set before the two players shared warm words at the net.

"To be able to share the court with Carla was incredible," said Barty, who will play either Anna Blinkova or Timea Babos next.

"She's a genuine champion and she's going to be very sorely missed."

A former world number six, Suarez Navarro was watched by her mother, who was wearing a replica of her daughter's kit and could be seen saving moments from the occasion on her phone.

She was given a huge ovation from the crowd as she successfully served to stay in the match at 5-0 down in the third set.

Barty teared up as she and the crowd applauded Suarez Navarro off the court in what will be her final appearance at Wimbledon.

American Williams, playing in her 23rd Wimbledon singles draw at the age of 41, beat Romanian Buzarnescu 7-5 4-6 6-3.

Williams led 5-1 in the third set and squandered two match points before turning and celebrating to her box as she converted the third.

Williams, now ranked 111th in the world, was playing in just her 10th match of the season.

She made her first appearance at Wimbledon in 1997 and won her first Grand Slam singles title on the SW19 grass courts three years later.

She will play Tunisia's 21st seed Ons Jabeur in the second round.

The Czech trailed 5-2 in the opening set before recovering to beat the French Open semi-finalist 7-5 6-4.

She will face Donna Vekic next after the Croat beat Russia's Anastasia Potapova 6-1 6-4.

Vera Zvonareva, runner-up to Serena Williams in 2010, claimed her first Wimbledon victory in seven years as she beat Marie Bouzkova 7-5 6-4.

McHale led the final two sets 5-3 and served for the match three times but was unable to hold her nerve to register victory.

More in this category: « Mark Cavendish cements comeback with emotional win at Tour de France. T20 World Cup moved to Oman and UAE after Covid-19 surge in India. »
back to top