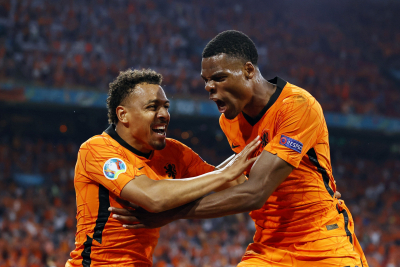 Frank de Boer has left his job as manager of the Netherlands after a shock European Championship last-16 defeat by the Czech Republic.

De Boer, 51, was appointed last September to replace Ronald Koeman, who had led the side into the finals before taking charge at Barcelona.

The Dutch topped Group C by winning all three games, but their 10 men were beaten 2-0 by the Czechs on Sunday.

A statement said both parties "will separate with immediate effect".

The Dutch football federation (KNVB) added: "Frank de Boer has announced that he does not want to continue.

"This is also in line with the contract between both parties, which required a place in the quarter-finals. That contract will not be renewed."

It marks another disastrous managerial spell for De Boer, who lasted 77 days and five games at Crystal Palace, and 85 days and 15 games at Inter Milan,

De Boer added: "In anticipation of the evaluation, I have decided not to continue as national coach. The objective has not been achieved, that is clear.

"When I was approached to become national coach in 2020, I thought it was an honour and a challenge, but I was also aware of the pressure that would come upon me from the moment I was appointed. That pressure is only increasing now.

"That is not a healthy situation for me, nor for the squad in the run-up to such an important match for Dutch football on its way to World Cup qualification."

Twitter
More in this category: « T20 World Cup moved to Oman and UAE after Covid-19 surge in India. Roger Federer advances to 2nd round after Adrian Mannarino retires due to injury. »
back to top