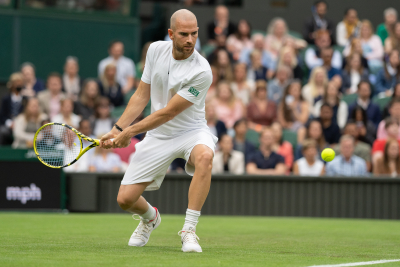 The world number 41 battled on and lost the fourth set, then retired after one point in the decider.

A sympathetic Centre Court crowd gave a heartfelt ovation as Mannarino, on his 33rd birthday, limped off court.

"It is awful, it shows that one shot can change the outcome of a match, a season, a career. I wish him all the best," said Federer.

"I hope he recovers quickly and we see him back on the courts. He could have won the match."

The Swiss 20-time Grand Slam champion will play France's Richard Gasquet or Japan's Yuichi Sugita in the second round.

Meanwhile British number one Dan Evans reached the second round of Wimbledon with a straight-set win over Feliciano Lopez.

The 31-year-old will next face either Dusan Lajovic of Serbia or Frenchman Gilles Simon.

"It was great. It's amazing to be back playing at Wimbledon again. I didn't realise it was going to be as busy," Evans said.

"I'm delighted to win. I played some good tennis.

"The first set I was probably a bit too into myself, once I let go a bit I really got rolling.

"It was a good mental effort."

The German fourth seed, 24, claimed a comfortable 6-3 6-4 6-1 win and will meet Slovakia's Norbert Gombos or American Tennys Sandgren in round two.

The Frenchman was given a warning for unsporting conduct for not trying towards the end of the third set, and received whistles and jeers from the crowd for walking off and taking a seat in response.

More in this category: « Netherlands boss Frank de Boer leaves job after Euros exit. Sterling and Kane strike in second half to send England into Euro 2020 quarter-finals. »
back to top